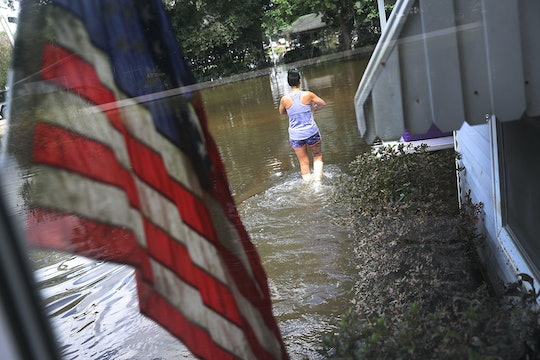 Climate change continues to be an important issue around the world as 2017 approaches. A study published Monday revealed that extreme downpours due to climate change will only increase in coming years, according to scientists researching how human activity contributes to the evolving climate patterns. This study is especially important to take note of, as it's just one of many highlighting the impact climate change has on the earth and its residents in recent years, and because flooding caused by heavy downpours, along with other effects, has proven to have grave outcomes globally, as well as at home.

As CBS reported, scientists at the National Center for Atmospheric Research (NCAR), published a study in the journal Nature Climate Change, revealing that extreme downpours could significantly increase by the end of this century throughout the United States – even by 400 percent in some regions.

According to a news release by NCAR, the study found that the Gulf Coast, as well as states like New Mexico, Arizona, Texas, Louisiana, and Alabama, could see increases in summertime storms from 200 percent to more than 400 percent. Other areas throughout the country could experience an increase of individual extreme downpours by 70 percent. The shift and increase in extreme downpours could cause flash flooding, mudslides, and other negative effects on agriculture, according to the release. As the BBC reported, scientists have published research revealing a variety of ways climate change has significant negative effects around the world.

Andreas Prein, NCAR scientist and lead author of the study, said the increases shown in the study were "huge."

"These are huge increases," Prein said, according to the news release. "Imagine the most intense thunderstorm you typically experience in a single season. Our study finds that, in the future, parts of the U.S. could expect to experience five of those storms in a season, each with an intensity as strong or stronger than current storms."

The news release indicated that a warmer atmosphere can cause an increase in extreme precipitation, since the warmth allows the atmosphere to hold more water, which then produces heavier rain.

This past August, Louisiana's flood – considered by the Red Cross to be the worst natural disaster in the United States since Hurricane Sandy in 2012 – caused a reported death toll of 13, with some 40,000 homes affected.

As LiveScience reported, meteorologists Jeff Masters and Bob Henson attributed Louisiana's historic flood in August, in part, to the "phenomenal" moisture in the atmosphere in their Weather Underground blog, Wunderblog:

...Like a tropical depression, the low had a warm core, and the counter-clockwise flow of air around the storm brought huge amounts of tropical moisture from the near record-warm waters of the Gulf of Mexico and northwest Atlantic northwards over land. The amount of moisture in the atmosphere over the Gulf Coast region over the past week has been nothing short of phenomenal...

As with anything else, the more society can learn about research concerning climate change, the better. And whether you're a climate expert or not, it's important to understand that, while the science may be lofty, the effects of such profound climate dilemmas are not.