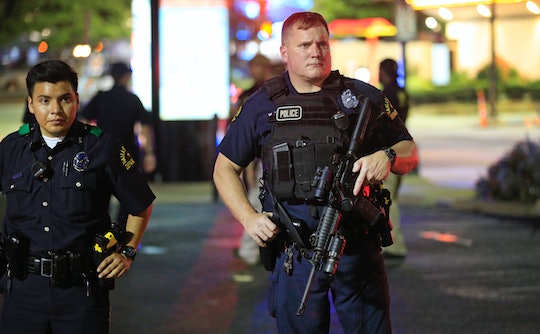 Eyewitness Accounts From The Dallas Shootings Paint A Terrifying Scene

After the shooting deaths of two black men by police officers in Louisiana and Minnesota on consecutive days this week, reigniting nationwide anguish over what many activists consider racial injustice, the situation somehow deteriorated into even more pain for even more families Thursday. During an otherwise peaceful protest in downtown Dallas over the deaths of Alton Sterling and Philando Castile, snipers shot 12 Dallas officers in what seems to be an extreme act of retribution, killing five. And eyewitness accounts from the Dallas shootings mirror the cellphone video footage of the tragic last moments of both Sterling and Castile in the fact that they document a harrowing loss of life because of anger or fear, or both.

Update: One of the snipers has been identified as Micah Xavier Johnson, a former Army Reservist who served in Afghanistan, according to ABC News. He was reportedly killed by police when they detonated a bomb.

Dallas Police Chief David Brown called the attack an "ambush-style" shooting during a press conference, according to NBC News, adding that law enforcement officials have so far apprehended three suspects, and that another died after engaging with police. Brown has, however, declined to provide additional information about the shooters, who police and witnesses agree seems to have carried out a coordinated, deliberate execution. Those who saw the slaying firsthand, like photographer Brendan Tyler Hester, describe a chaotic, gunshot-saturated scene consistent with Brown's statement that the shooters "wanted to kill white people, especially white officers."

"When I turned around to see where my friends were I saw a policeman next to me get shot," Hester told BBC News, also recounting how he could hear officers screaming that some of their comrades were "down" in the immediate aftermath. "He dropped to the ground screaming. The police shouted at us to run so I did."

Ismael Dejesus, on the other hand, was in his downtown Dallas hotel room when he heard the shooting begin, and, like so many bystanders in the digital era, immediately began filming. In narrating his footage for CNN's Don Lemon shortly afterwards, Dejesus described how one man exited a Chevy Tahoe wearing tactical clothing and carrying "a rifle, AR-15, clear as day." When he started shooting, his actions certainly looked planned, Dejesus said, and he seemed skilled:

It looked like an execution, honestly. He stood over [the officer] after he was already down and shot him maybe three to four times in the back. It was very disturbing to watch.He shot without any fear. He didn't care. [The police officer] wasn't able to wound him at all. He came around the corner and ended up shooting the officer about half a foot away.

Police Chief Brown has said that the shooters weren't affiliated with any activists groups such as Black Lives Matter, although some initially thought that protesters were doing the shooting, The Daily Beast reported. One reporter for the outlet witnessed the agitation between protesters and police that erupted anew after the shots were fired, and police detained a man who actually wasn't involved:

'He was with us the whole time, he was marching with us,' [protesters] yelled above the sirens and looming helicopter drone.

'How many people you need to tell you he was with us the whole time?' said protester David Sansalone. 'Y’all just seen a prime example of why black people get killed by scared police officers.”

'They know he ain’t the shooter,' the crowd erupted as the arrest continued, their fellow protester put in a car and driven from the scene. 'They hunt them down,' someone yelled. 'You can’t protect me,' screamed another.

That interaction highlights the fear, anger, and distrust that exists on both sides of this conflict. And the destruction that those emotions inspire is truly heartbreaking. One YouTuber on the scene uploaded a street-level video recording of the attack:

In it, he captures polices officers, their cruiser sirens blaring and lights flashing, reacting to a barrage of loud bangs. (The New York Times reported that the snipers fired from"elevated positions" in buildings. "They're shooting right now and there's an officer down, and it's coming from right over there, from around these buildings," he said. "... I think another officer is down, around the corner over there."

Although the scene in Dallas is secure and the harrowing shooting is over, the confusion, frustration, and anguish that rose out of this situation — and from the shootings of Sterling and Castile — is unlikely to fade anytime soon. These shootings perpetuate a hopeless cycle of distrust and suspicion on both sides, deepening resentments and stoking terror. As the eyewitness accounts and videos from Dallas show, it must end.