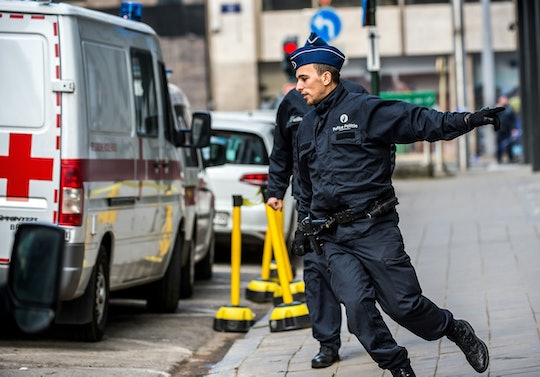 Eyewitness Accounts Of The Brussels Attack Are Devastating

After deadly blasts that killed more than two dozen people and injured many more in the Brussels' international airport and a metro station Tuesday morning, Belgium raised its terrorism threat to its highest level. The airport and public transit system in Brussels remain closed, according to the BBC. As the public tries to understand the attack, which came within a week of the capture of Paris attack suspect Salah Abdeslam in Molenbeek, eyewitness accounts of the Brussels attacks have begun rolling in.

The first attack took place at Brussels' Zaventem airport, when twin blasts exploded close to 8 a.m. local time. Gunfire was heard in the departure terminal, followed by two explosions, according to The Independent. Public transit to the airport was stopped shortly afterwards and the airport confirmed the attack.

At 9:10 a.m., a blast was reported at the Maelbeek metro station, which is close to the European Commission, the executive head of the European Union. Just over 15 minutes later, the Brussels metro system was closed, and, by 10 a.m., the entire Brussels public transit system was closed. Before noon, the Belgian federal prosecutor had confirmed that the three blasts were terrorist attacks, and said at least one of them was likely a suicide bomber, according to ABC. ISIS claimed responsibility for the attacks.

As Belgium launches its investigation and the city shuts down, eyewitnesses have come forward with their stories at both scenes of the attacks.

"We felt like a wave, you feel it in your whole body," Andrew Brandt, a visitor from Arizona, told TIME of the explosion at the Brussels airport. "It is like you are in water and someone jumps in the water and you feel that wave." He described the confusion of airport staff and security, as well as the contradictory messages passengers received, as they were told both to evacuate and to stay where they were. "The security people had no idea what they were doing," he said. "Where the hell were we supposed to go?"

Jef Versele, who was at the airport and headed to Rome, told NBC:

At the Maelbeek metro station, passengers were evacuated via the subway tracks, according to CTV, and a nearby hotel turned its lobby into an emergency first aid area. Brian Carroll, who was on the metro en route to a conference, told The New York Times:

Others shared footage of the evacuations, where children can be heard crying in the background as people walk down dark subway tracks.

The survivors' stories are heartbreaking and reveal the confusion, chaos, and panic caused by these attacks. Investigations into them are ongoing, and for now, Brussels remains on lockdown.