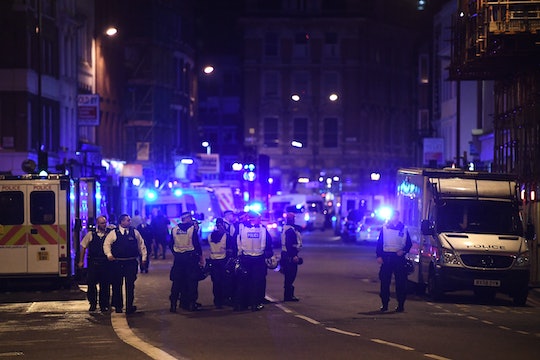 Accounts Of The London Bridge Incident Are Horrible

On Saturday night, multiple violent incidents occurred in London. In the first, a van reportedly drove into pedestrians on the London Bridge, according to CNN. Then, on Saturday, a man reportedly stabbed two people inside of Borough Market. There was also reportedly a third incident at Vauxhall, according to The Evening Standard. Eyewitness accounts of the London Bridge incident describe graphic, terrible details like bodies lying in the road. Some eyewitnesses also said it appeared that the car was purposefully aiming to hit people, according to CNN.

EARLIER: More than one person has died so far as the result of the incident on London Bridge, according to the BBC, but police haven't specified just how many have been hurt or killed. One BBC reporter, Holly Jones, told the BBC that she was on the bridge when the van began hitting people. She said that the van appeared to be going "about 50 miles an hour," and said she believed the driver was white, according to the BBC:

Jones also told the BBC that she estimated there were four "seriously injured" people who were being treated by paramedics.

Mark Roberts, another eyewitness, told CNN that the van was driving south across the River Thames and began swerving before it hit people. He said that the van collided with one person, knocking them "about 20 feet into the air."

Will Heaven, who told The Evening Standard that he was in an Uber crossing the bridge when the incident occurred, said the first thing he saw was someone "down on the pavement" on the left side of the bridge with a crowd of people gathered around them. Heaven told the Standard:

We drove a little further over the bridge. There was another person in the road itself. The penny dropped that something quite serious was happening.

The traffic came to a standstill. The Uber driver said something bad is happening here. We could hear sirens coming.

And a passerby told the BBC that crowds were making their way down Southwark Street away from the scene at the bridge, according to The Evening Standard:

I started to see dozens of people walking and running away, clearly distraught. Mostly young people, many of them in tears.

Men walking in an almost zombified state, in shock.

It appears there was a stabbing at the same time. There were gun shots, people heard multiple gun shots, at least 12 shots.

Other witnesses told the BBC that, as they were running away from the bridge, they noticed "people on the ground," but that it was unclear how many of them were injured or dead.

So far, police have told The New York Times that it's too early to speculate about a motive. They did not have enough information as of Saturday night to label the incident a terrorist attack. Still, the Times noted that after the attack at Ariana Grande's concert in Manchester on May 22, Prime Minister Theresa May raised the threat level in England to "critical," and said that authorities felt another attack was very likely. She said at the time, according to NPR:

As more information comes out about the attack, it's important not to jump to conclusions. Though eyewitness accounts of the attack are terrifying, speculation and name-calling will not allow authorities to do their jobs any better and will not provide comfort to the families of the wounded and the dead.