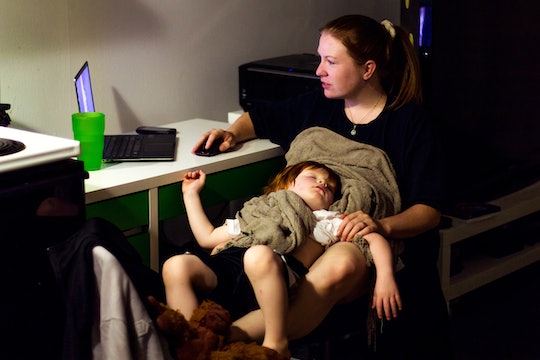 It only took six words to trigger a massive debate within a Facebook moms’ group: “What was he being arrested for?” The man in question was George Floyd, and many of the angered moms were confused as to why one mother was even asking.

“It’s insulting that white people are curious first, like it actually changes the severity, the racism and injustice,” one mother wrote on MamaTribe Chicago, a moms’ group in the Windy City that has nearly 43,000 members.

Online moms’ groups have tackled the #Metoo movement, vaccinations debates, and more in the past. But now, some are wondering if Facebook and other social media may not be the best platforms to discuss police brutality and violence against Black people.

UES Mommas, a Facebook group with about 40,000 members designated for New York mothers living on the Upper East Side, had to be temporarily folded, as the New York Times reported, after members argued incessantly about the incident concerning Amy Cooper and Christian Cooper (the white woman who called the police about the Black bird watcher), and then the death of George Floyd.

Other Facebook groups in major cities have also had to shutter as moderators grappled with the barrage of opinions about the matter, as well as the struggle to pave the way for a more open, inclusive environment for women of color.

The pages that are still open — yet roiling — are filled with moms who are angered over deleted Black Lives Matter (BLM) comments and unclear direction from moderators over what can and can’t be said. Some are arguing that the issue is too “political,” and can’t be mentioned — to the fury of many other members.

But if Facebook groups are the place where moms turn in order to discuss everything from kitchen renovations to conceiving to divorce, should it also be the spot where they dig deep to understand more complex matters? Isn’t this too a “parenting” issue?

“I feel like there were a lot of people in this group initially who didn’t want to hear it, and asked that it not be discussed here a couple weeks ago, but that has gone away for the most part,” says Caitlin Sutherland, a white mother speaking about the Peloton Moms Facebook page, for moms who enjoy spin bikes, which has 51,000 members. “It’s either because Peloton spoke out so strongly in support of Black Lives Matter, or because they got shouted down by others pretty quickly, or, more hopefully, because they opened their eyes to current issues and understand how important it is to discuss.”

A mom posted saying, ‘All Black mother’s hearts broke when George Floyd called for his mother,’ and there were hundreds and hundreds of white moms who commented to correct the original poster that, ‘no, it was all moms.'

Stephanie Nicole, a Black woman who lives in Portland, says she was horrified when the Peloton administrators were originally deleting the BLM posts and comments.

She says that the video of George Floyd is a perfect example of why we need to talk about systemic racism, white privilege and police brutality everywhere.

“A mom posted saying, ‘All Black mother’s hearts broke when George Floyd called for his mother,’ and there were hundreds and hundreds of white moms who commented to correct the original poster that, ‘no, it was all moms,’” Nicole says. “Which misses the point of the post in that Black mothers experience and live in constant fear that our sons will be the ones crying out for help with their neck under the cop’s knee.”

Nicole says Black parents are having conversations with their children at the age of 4, while well-meaning white moms are asking for age-appropriate books about racism for 11-year-olds.

“If we are too uncomfortable talking about racism and privilege in an online somewhat anonymous space where folks often start posts like, ‘I can’t post this on my own page,’ how are we ever going to be comfortable being uncomfortable to have these conversations in real life and actually do the work to make a positive and lasting change?’”

As long as the groups have representation from parents of color, the community groups for parents can be a great place to share educational resources and local activism events, says Danielle Hanken, a moderator for River Forest Parents, an Illinois Facebook page.

For one woman, these discussions are all she has left.

Nicole Holbrook’s 18-year-old son was gunned down one and a half years ago.

Deshawn was half-white, half-Puerto Rican, and he was killed by a 16-year-old Black man. “My close Black friends said to me, ‘You must hate Black people now,’” Holbrook says.

But that’s far from the truth. She had named her son Deshawn to prove a point: that although his name is more common in the Black community, we’re all the same inside.

“I still firmly believe that race in itself does not determine how an individual acts, and I feel the stereotypes and generalizations add so much fuel to this ever-burning fire of misunderstanding and violence,” Holbrook says.

The man who killed her son was charged with first-degree murder and distributing marijuana. Holbrook says that while Black people are fighting to be equal, many people are still ignoring the issue, allowing entrenched racism to continue. When children aren’t shown love and respect, they grow up and find someone or something to hate.

“I think one reason things aren’t changing is because we aren’t talking about these things,” Holbrook says.

Still, are Facebook and social media the place for these chats?

After moderators left up an anti-semitic post in a New York City mom’s group in 2017, upset members splintered off to form their own group explicitly based around tolerance. “Our goal with this new, improved group is to foster a safe space for moms to discuss parenting specific content,” reads the pinned post on Moms of Manhattan, which welcomes all “positive-minded Manhattan moms.”

If what’s happening in the comments is the opposite of supportive or making your internet neighbor’s world a little better… what’s the point?

Bryce Gruber, an administrator with Moms of Manhattan, says the 2017 post was blatantly racist, and the new group has been a positive space for conversation. Conversations around the Black Lives Matter movement, and police violence, have been civil. Only one post has been pulled, “because it seemed to us to be encouraging violence during the protests,” says Gruber by Facebook Messenger chat. “If what’s happening in the comments is the opposite of supportive or making your internet neighbor’s world a little better… what’s the point?”

She recognizes everyone’s right to free speech, and to “hate anyone they want to hate” but says that isn’t what her mom’s group is about.

Susanna Roberts, a white mother of three in Atlanta, said she understands why some white moms wouldn’t want to discuss race and similar issues in the group chats. They’re hard, uncomfortable discussions, she acknowledges. And she — like many women — jump onto social media to de-stress and get away from life.

“We belong to these groups because of affinity for one thing or another, when when people go to them, they are wanting to escape from everything else,” Roberts says.

But this is exactly an example of white privilege, she explains: that escape is a privilege white women are given — they can choose when they want to engage and when they don’t want to talk.

“When we can’t escape the uncomfortable, people get very agitated and angry,” Roberts says. “However, our Black and brown brothers and sisters never have this privilege.”

She believes that these hard race conversations need to be had in these groups, where women can learn, listen, and educate themselves while hearing other people’s perspectives and realities.

“What better place to listen and learn from people we already have something in common with, and can see as a real person and have a connection?” she says.

More Like This
10 Parenting Lessons From Abbott Elementary That You'll Want To Write Down
Instagram Captions For Your Cup Of Morning Coffee
Home Reno Culture Makes Me Feel Like I Live In A "Before" House
I’m Getting Dual Citizenship For My Jewish Children, Just In Case.