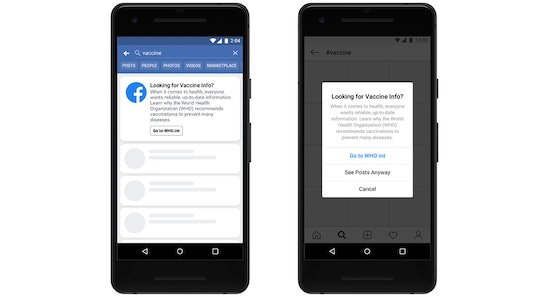 Misinformation can spread like wildfire, especially when you throw social media into the mix. Any information, true or not, can reach thousands of people in a matter of minutes. That's what's happening with one of parenting's biggest hot-button issues — vaccines — despite the fact they prevent infectious diseases and are scientifically proven to be safe. Thankfully, some companies are stepping up to combat this problem, including Facebook's new initiative. The strategy, which involves pop-up windows, has received praise from the Centers for Disease Control & Prevention (CDC).

Starting Wednesday, Facebook users will see an educational pop-up window appear on screen every time they search for vaccine-related information, visit vaccine-related Facebook groups and pages, or tap a vaccine-related hashtag, according to CNN. The change will also take affect on Instagram, which is owned by Facebook.

For Facebook users based in the U.S., the pop-up window will direct them to vaccine-related information on the CDC's website. If users are outside of the U.S., they will be directed to the World Health Organization (WHO) website's vaccine information page.

Any anti-vaccine related group or page will no longer be promoted by ads and will be less prominent in search findings. The hope? That the reach of misleading information will be diminished thanks to these new efforts.

The CDC seems to believe Facebook will have some success in its mission, as it praised the initiative in a statement to CNN. "We know that parents often turn to social media to access health information and connect with other parents, and it can be difficult to determine what is accurate and who the credible sources of information are," CDC spokeswoman Kristen Nordlund said, while also "applauding" the company for its efforts.

Facebook originally introduced it's plan to combat vaccine-related misinformation in February 2019, proposing it would prevent anti-vax groups from appearing in the "list of groups that Facebook recommends users join," a rep told CNN at the time. Now it has unveiled its pop-up window initiative, and the timing couldn't be better.

The U.S. in the midst of a measles epidemic with more than 1,200 confirmed cases across 31 states since the beginning of the year, according to the CDC. Even so, some areas still face low vaccination rates. In Wisconsin, for instance, 55,000 children within the state's school districts are not vaccinated, according to Kenosha News. And in Washington, a measles outbreak in March kept 800 students out of school, according to The Seattle Times.

In New York, however, 26,000 school-aged children are being asked to get vaccinated or leave their schools because the state no longer accepts vaccination waivers based on religious reasons, according to The New York Times.

Many medical professionals suggest that anti-vaxxer movements are responsible for low vaccine rates and therefore the higher risk of outbreaks. In fact, the WHO lists vaccine hesitancy as one of its top global health threats.

"Vaccine misinformation is a major threat to global health that could reverse decades of progress made in tackling preventable diseases. Many debilitating and deadly diseases can be effectively prevented by vaccines," Tedros Adhanom Ghebreyesus, WHO Director-General, said in a statement, according to NBC News. "Major digital organizations have a responsibility to their users to ensure that they can access facts about vaccines and health."

Other social media platforms are also doing their part to combat vaccine misinformation. Amazon removed anti-vaccine documentaries from it's Amazon Prime streaming services, while YouTube pulled ads from anti-vaccine content. And Pinterest now directs anyone who searches the keyword "vaccine" to health related organizations, according to CNBC News.

Misinformation is a dangerous thing, especially when people's health is concerned. Facebook's new pop-ups are a great start in the right direction, as it sends users to credible sources for reliable information about vaccines.