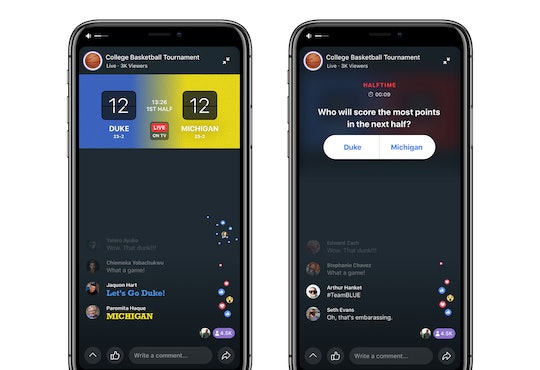 Facebook is great at bringing people closer together. It can remind you to reach out to friends, helps you stay in the know when your loved ones are too far away, and connect with people you never would have imagined. And now a new feature will make people love the social media site even more. Seriously, Facebook's Watch Party feature will be every lover of live TV's new best friend, especially since you won't have to get off your couch to use it.

On Wednesday, Facebook announced it will be expanding its Watch Party feature and testing a new way to have discussions with besties while watching TV. With this feature, people will be able to have a "party" on Facebook in real time with their friends, watching the same program together, even when their friends are on opposite sides of the country.

This special feature will allow people to watch certain sporting events live, where they will have the ability to cheer and complain about their favorite (and least favorite teams) with their Facebook friends. As a plus, Facebook will keep updating the score so people don't have to take their eyes away from the game (or the chat).

It's the perfect feature for anyone who loves watching the big game out with their friends, but can't find a babysitter in time and have to stay at home. This way, users can still watch the game with them, without actually being with them.

Unfortunately, this feature is only available for sporting events right now, but it won't be for too long. Within a matter of time, Facebook users (especially those who love watching and reacting to shows like The Bachelor in real time) will be able to use this feature for "all kinds of live events and cultural moments," according to a press release.

This includes moments like the Academy Awards, and yes, the premiere of The Bachelor.

Watching something with friends is a shared experience that brings people closer together. And that is exactly what Facebook wants to do — bring people together. During a phone call last year about Facebook's earnings, the company's founder, Mark Zuckerberg, said that video (and live discussions) are the future of Facebook. According to Forbes, Zuckerberg said:

When done well, video brings us closer together. We've found that communities formed around video like TV shows or sports create a greater sense of belonging than many other kinds of communities...But too often right now, watching video is just a passive consumption experience.

Facebook is hoping that users interact with their video with this Watch Party expansion. In addition to having the live score on their Facebook feed, users will also be able to add trivia questions about the players, polls, and fun facts for their friends to read, according to the press release. How fun is that?

If people are thinking that this feature sounds familiar, it's because it is. Watch Party already exists on Facebook, just not on this level. Currently, Watch Party can be used to only watch videos that exist on Facebook. Users can still schedule a special event to watch any of Facebook's original programming, or any video that has been uploaded to the website.

With the new Watch Party features, fear of missing out will be pretty much obsolete. Why worry about missing out on watching the big game with your friends when you can do it from the comfort of your own home (and pajamas)?

More Like This
Is It Safe To Keep Using Period & Fertility Apps In A Post-Roe America?
Mom's TikTok Sparks Debate On Whether It's "Normal" For Babysitters To Sleep On The Job
Ciara’s Kids Make The Sweetest Cameo In Her New Song “Treat”
Reddit Is Not Impressed With Dad Who Hid Neighbor's Gnome Because It Scared His Kid