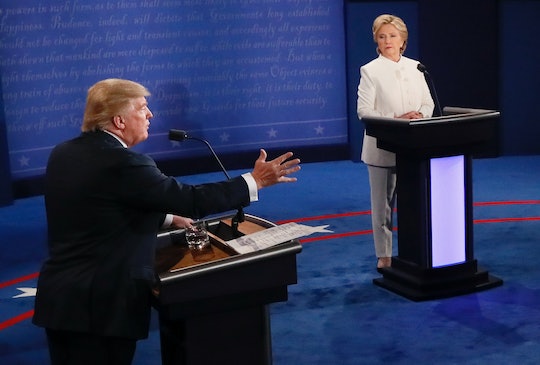 The Fact Checkers have had a tough job during this objectively outrageous presidential campaign. But the laptops once again fired up on Wednesday night as Former Secretary Hillary Clinton and businessman Donald Trump took the stage together one final time to make their case to the American people. Here are just a few of the most important things the media found while they were fact checking the final presidential debate.

Arguably the biggest bombshell of the night, if not the whole campaign, was Donald Trump's insistence that the system is somehow "rigged" against him and for the Clinton campaign. The rigging excuse is the one Trump gave for not being willing to say on Wednesday night that he would, in fact, accept the outcome of the election on Nov. 8 and concede accordingly should he lose.

When asked this question directly by debate moderator and Fox News anchor Chris Wallace, Trump responded with an ominous hint at what could wind up being a Constitutional crisis should he refuse to concede or be part of a peaceful transition of power in the United States.

"I will look at it at the time. I'm not looking at anything now," Trump said at the final debate, according to NBC News. "What I've seen, what I've seen is so bad."The dishonest and so corrupt (media) they have poisoned the minds of the voters. But unfortunately for them, I think the voters are seeing through it. I think they're going to see through it. We'll find out on November 8."

Here are just a few of the facts that deserve a second look from Wednesday night's final debate from Las Vegas.

But is the election system in this country "rigged" with fake voters as Trump says? Not according to the expert findings. According to NBC News, research shows that, of more than 1 billion votes cast over a more than 10-year period, there were just 31 cases of actual voter fraud discovered. The New York University Brennan Center for Justice found "it is more likely that an individual will be struck by lightening that tat he will impersonate another voter at the polls," according to NBC News.

Clinton Has Not Suggested Abolishing The Second Amendment

Trump favors telling voters that Clinton will "take your guns away"or, as he said in the final presidential debate, according to NPR, "We will have a second amendment which will be a very, very small replica of what it is right now." That is false; according to NPR, Clinton favors stricter regulations on gun ownership but says her position is "consistent with Constitutional rights."

Partial-birth abortion is not a medical term, it is a political one used to describe an abortion procedure (whose medical name is late-term abortion) for women who are in their second or third trimester of pregnancy, according to NPR. According to the Alan Guttmacher Institute, in 2000, about 15,000 abortions were performed on women 20 weeks or more into their pregnancies, the vast majority between the 20th and 24th week of pregnancy, NPR reported.

Trump Claims He Was Endorsed By Immigration And Customs Enforcement (ICE)

Not true. ICE is a federal agency and can't endorse a presidential campaign. Trump's endorsement, according to PBS NewsHour, actually came from the National Immigration and Customs Enforcement Council, the private union representing immigration and law enforcement officers, PBS reported.

During the final debate, Clinton called on Trump to denounce Russia and its leader Vladimir Putin's involvement in the recent hacking of several U.S. political institutions in an effort to interfere in the upcoming election. Trump isn't buying it.

“She has no idea whether it’s Russia, China, or anybody else,” Trump said Wednesday night, according to CBS News. “Hillary, you have no idea.”

But according to CBS News, just two weeks ago, the intelligence community released a joint statement from the Department of Homeland Security and James Clapper, Director of National Intelligence, saying:

The U.S. Intelligence Community (USIC) is confident that the Russian Government directed the recent compromises of e-mails from US persons and institutions, including from US political organizations,” according to CBS News. "These thefts and disclosures are intended to interfere with the US election process. Such activity is not new to Moscow—the Russians have used similar tactics and techniques across Europe and Eurasia, for example, to influence public opinion there. We believe, based on the scope and sensitivity of these efforts, that only Russia’s senior-most officials could have authorized these activities.

Seems like Trump is the only person getting high -evel security briefings that isn't clear on Russia's intentions. According to NBC News, Trump has been receiving classified security briefings on matters like these from the intelligence community since mid-August.

This campaign has certainly created a boom market for fact checks. And with just three weeks left until the election, they've got just a bit more work to do before they head out on a well earned vacation.