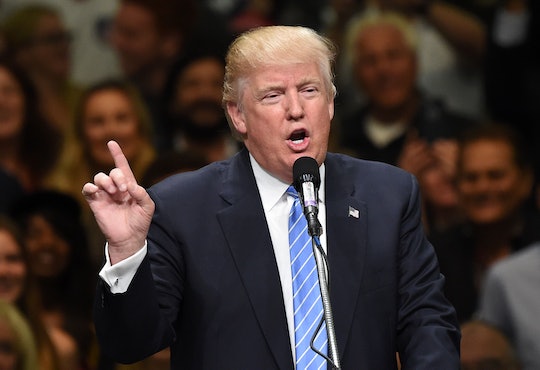 Despite claims that he'll be a champion for women, it seems as though presumptive Republican presidential nominee Donald Trump may still believe pregnancy is bad for business. Former Secretary of State and Democratic frontrunner Hillary Clinton's campaign dug up a clip of the businessman suggesting that a woman's pregnancy may be problematic for her employer. Fact-checking Trump's "pregnancy inconveniences business" comment reveals that pregnant women are actually working harder than ever before.

The Trump quote in question is from a 2004 episode of Dateline, NBC News reported:

Apparently, there are many employers who feel that way: according to a 2014 article in Fortune, the 2013 fiscal year brought with it more than 5,000 pregnancy discrimination cases. The Pregnancy Discrimination Act is in place to ensure that an individual's pregnancy doesn't impact her opportunities or treatment at work. At the same time, the Americans with Disabilities Act guides employers in making "reasonable accommodations" for those with permanent or temporary disabilities; the Equal Employment Opportunity Commission defined this to include pregnancy.

Despite the safeguards, pregnant individuals still encounter discrimination across the country. Though women in all kinds of jobs deal with the fallout of employers skeptical of their ability to perform, The Washington Post reported in 2014 that the majority of women who file EEOC claims work in "low-wage fields." In 2013, most of the claims were filed by employees in "health care & social assistance" careers. More women than ever are stepping into roles traditionally held by men, Fortune reported; following the recession, many women found success in "low-wage industries." Often, though, those positions are particularly physically demanding, and pregnant women may require special accommodations to keep their jobs, but employers aren't always willing to make it work.

Staying on the job while pregnant isn't easy, but women are determined to show that it is possible. Businesswoman Carolyn Kepcher was the Executive Vice President of Trump Golf Properties; according to NBC News, she didn't reveal her pregnancy to Trump until she was three months away from giving birth. She decided that telling him later in the pregnancy would keep him from doubting her ability to do her job. She's not alone in powering through pregnancy: Pew Research Center found "that 66% of mothers who gave birth to their first child between 2006 and 2008 worked during their pregnancy." Data collected by the U.S. Census Bureau showed that, in the later 2000s, 82 percent of pregnant employees worked for at least eight months of their term.

The remaining consideration, then, isn't whether pregnant women are committed to their jobs — it's whether accommodating them is actually a fiscal challenge. According to the National Women's Law Center, the answer is no. A study revealed that, of all workers in the United States between 2010 and 2012, only about 1.6 percent gave birth each year (that's just 4.4 percent of "women of childbearing age" in the workforce). Those numbers are already small; an even smaller percentage require accommodations during pregnancy. Trump's words imply that women's pregnancies may overwhelm business owners; in reality, pregnant women make up an extremely small percentage of the workforce.

When accommodations do need to be made, they're likely to be minimally disruptive and genuinely affordable. In "The Business Case for Accommodating Pregnant Workers," the National Women's Law Center indicated that many needs of pregnant women (to take more frequent bathroom breaks or to remain seated for most of the day, for instance) are already often in place for individuals with disabilities. The Job Accommodation Network found that, when employers accommodated workers with disabilities, it generally cost them less than $500 per person and most often cost them nothing at all.

When a woman gets pregnant, she has a lot of things to worry about; fears of getting fired or being placed on unpaid leave add to the burden of preparing to bring a new life into the world. In 2013, Pew Research Center reported that mothers are breadwinners in "40% of all households with children under the age of 18." It's more important than ever that a woman's job isn't jeopardized by a pregnancy and the horrible, false stigma that often comes with that in the business world. As a business leader and presidential candidate, Trump could do some real good by reevaluating his 2004 statement and taking a stand for pregnant women.