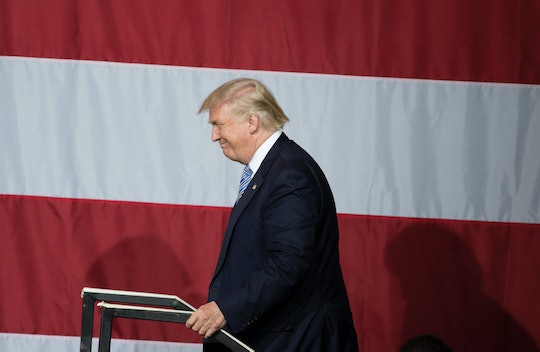 On Thursday, a pro-Hillary Clinton super PAC reportedly leaked a draft of Donald Trump's speech that was to be first delivered at the peak of the Republican National Convention. Brad Woodhouse, president of super PAC "Correct the Record," sent the full text of the speech in an e-mail to Politico, which promptly posted the text online. Obtained from a teleprompter, this advanced viewing gives the reader a leg-up in researching Trump's claims before they're spoken live. Fact checking Trump's speech reveals false assertions regarding the economy, our current president, and, of course his presidential rival, Hillary Clinton.

Entering this final night, the stakes for Trump's speech are particularly high. Trump's been criticized for speaking off-message in the past, and his newfound use of a teleprompter is meant to prevent him from doing so. So-called "Teleprompter Trump" speaks more accurately of the Republican Party's platform, but definitely lacks the energy and perhaps the passion that has usurped such viral attention from both voters and media. Even with a prepared message, keyed into a teleprompter, Trump's speech lacks consistency. Ironically, at the beginning of the draft, he assures: "I will present the facts plainly and honestly," The truth revealed, though, is much less "plain."

On Obama & The Economy

In his speech, Trump asserts that "President Obama has doubled our national debt to more than $19 trillion, and growing." In actuality, "the total federal debt is at $19 trillion. But most of it was amassed before Obama took office."

On His VP & Unemployment

Trump claims "we will bring the same economic success to America that Mike brought to Indiana." The Washington Post contests that Indiana's unemployment rate is in line with national averages.

On Clinton & The 2nd Amendment

"My opponent wants to essentially abolish the 2nd amendment," the speech reads. Clinton has recommended "regulation" of the Second Amendment, never abolishment.

On His Tax Plan

Trump says that, after his tax plan has been implemented, "trillions of dollars will start flowing into our country." Truthfully, his sweeping cuts would "increase the national debt by nearly 80 percent of gross domestic product by 2036, offsetting some or all of the incentive effects of the tax cuts," experts say.

Trump's claims echo his typical discourse of blame and speculation presented as truth. His presentation of fear-inducing, created "facts" serve to push his proposed agenda rather than address actual issues. A teleprompter might anchor him to a message, but the validity of that written message is not a given.