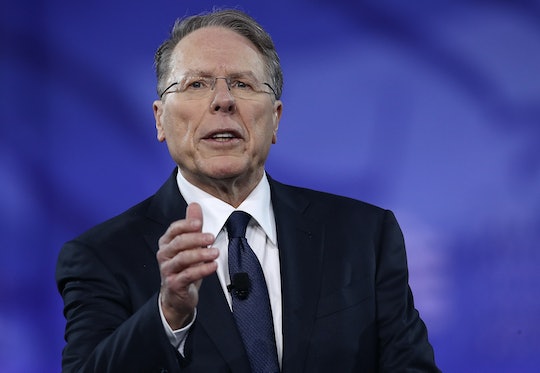 Executive Vice President and CEO of the National Rifle Association, or NRA, Wayne LaPierre spoke at CPAC, the Conservative Political Action Conference, on Friday around 1:00 p.m. Eastern Time. And some of his remarks are getting some attention on social media. At the event in Maryland, LaPierre stated, “Folks, the media said we were [re]arranging deck chairs on the Titanic by backing Trump...But we’re still standing, and we’re still here, and we [have] got President Trump’s back.” He also made some questionable claims during his appearance, so fact checking Wayne LaPierre's CPAC speech for alternative facts is probably a good idea.

An NRA Twitter account on Tuesday gave a hint as to some of the contents of LaPierre's planned appearance, tweeting, "They lost a battle so they started a war," and, "Friday at #CPAC, we fight back against those sabotaging @realDonaldTrump." So is it any surprise that some of his remarks are, shall we say, controversial? Passionate? At the very least, thought-provoking?

One comment that LaPierre made that could be seen as "spirited" at best involved him saying that conservatives need to stand up for themselves if "the violent left brings their terror into our communities." But there were a lot more quotes from the head of the NRA that need to be picked apart and fact-checked.

In keeping with the "violence" theme, Fox News tweeted that LaPierre said, "Ladies and gentlemen, another definition of terrorism is violence in the name of politics." #CPAC2017."

The definition of terrorism, whether you check the definition with the FBI, or something as innocuous as the Merriam-Webster dictionary definition, can involve a terrorist act being politically-motivated. The Federal Bureau of Investigation defines terrorism as, “the unlawful use of force or violence against persons or property to intimidate or coerce a government, the civilian population, or any segment thereof, in furtherance of political or social objectives.”

But somehow I don't think LaPierre is talking about someone like the suspect in the Jan. 29 terrorist attack in Québec, Alexandre Bissonnette, who reportedly "really liked Trump" and, according to someone who knew him, "had a permanent grudge against the left.” Another classmate said, “He has right-wing, pro-Israel, anti-immigration political ideas." And there is no doubt that that was a violent attack.

Fox News also tweeted another comment LaPierre made during his speech:

"Wayne LaPierre: 'According to the FBI, Mexican drug cartels are working with 100,000 street gang members in Chicago alone.' #CPAC2017," the tweet read. LaPierre didn't provide a relevant source for that information, like a place on the FBI's website or a report the bureau might have put out citing the statistic. The FBI's website does have a report titled, "2011 National Gang Threat Assessment," that states, "Federal, state, and local law enforcement officials are observing a growing nexus between the Mexican drug cartels, illegal alien smuggling rings, and US-based gangs." But it seems to more explicitly link, "drug cartel rivalries" using "more aggressive tactics" to gain control over the Southwest border region — not the Chicago area.

In response to LaPierre's claim that "we," which likely meant conservatives considering the audience, "are the majority in this country," UCLA's Graduate School of Education & Information Studies professor Bill Sandoval pointed out on Twitter:

"Wayne LaPierre is not even the majority in his own organization of approximately 1% of the population." LaPierre might have been talking about conservative voters in general, whose candidate lost the popular vote in the 2016 presidential election.

An additional claim LaPierre made was that "the left's" protestors are being paid, according to Los Angeles Times correspondent, Matt Pearce. He tweeted, "NRA's Wayne LaPierre tells CPAC that the left's protesters are paid $1,500 a week and are dangerous"

On a personal note, I have protested several times, something that is protected as a right in this country and an act that our nation is proudly based on, and have never seen a paycheck from my attendance at any protest event. Just to break it down, let's look at some numbers from the largest combined protest in United States history, the Women's March.

Let's say that one appearance could count for your weekly payment as a protestor. So, $1,500 a person. A low estimate of the number of marchers in various locations in the country participating in that event is 3,336,865, according to Fortune. That would total a $5,005,297,500 payout to protestors for that one protest alone. Who would've paid for that? And why haven't any marchers come out to protest the fact that they haven't yet been paid for their participation?

On another note, Washington correspondent for New York Magazine, Olivia Nuzzi, also tweeted this about LaPierre's speech, "Wayne LaPierre says that 100 years ago people were hanged for leaking. And the CPAC crowd... cheers."

Leaving aside the appalling image of a crowd of people cheering over the idea of someone being hanged, this fact is almost definitely not correct. William Bruce Mumford, a 42-year-old gambler in New Orleans who pulled down the "Yankee" flag of arriving Union occupying soldiers and dragged it through the streets in 1862, "is the only American since at least the War of 1812 to be put to death for treason against the United States." And yes, he was hanged. LaPierre might have meant someone who committed treason who wasn't American and/or died another way 100 years ago, but there's no evidence of this, and it would invalidate his claim anyway.

In the age of #alternativefacts, it's always wise to fact-check and source your news. In the case of Wayne LaPierre's CPAC appearance, that might take a little more time and effort than usual.