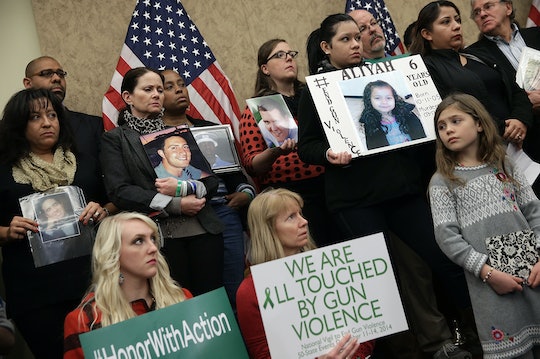 Wednesday marks four years since the mass shooting at the Sandy Hook Elementary School in Newtown, Connecticut, on Dec. 14, 2012. The news that a lone gunman walked into the school and shot and killed 20 children and six teachers (after shooting his own mother, and later killing himself) shocked and horrified the nation, and at the time, it seemed as though the Sandy Hook shooting would finally be the catalyst for real change regarding gun safety legislation. But not an awful lot has actually been achieved since then, and certainly mass shootings have continued to happen — the Pulse shooting in Orlando, the Colorado Planned Parenthood shooting, and the mass shooting in San Bernardino, to name three. Facts about gun violence show that it's still a major issue in the United States, and it's something that shouldn't be ignored, especially on a day like Wednesday.

United by their collective grief after the shooting, a number of family members of those killed at Sandy Hook created Sandy Hook Promise, a national non-profit designed to raise awareness about gun violence with the ultimate goal of preventing it in the first place. And the statistics the group provides on its website are staggering. Each year in the United States, more than 500,000 acts of gun violence occur, and each day, an average of 314 people — 41 of whom are children — will be shot (and almost one-third of those shot each day will die). But legislation meant to keep people safe varies greatly throughout the country, primarily because Americans have very different opinions on whether or not restrictions should actually be placed on gun ownership.

Support For Gun Rights Has Increased In The United States...

According to a 2015 Gallup poll, three years after the Sandy Hook shooting, just over half of Americans surveyed indicated that they thought gun restrictions should be tougher. That's about the same percentage as a decade earlier in 2005 — and a more than 10 percent drop from 2000, when approximately 66 percent of Americans were in favor of greater restriction.

Furthermore, while almost 60 percent of those surveyed said they would be supportive of a national ban on assault rifles (the weapon of choice of mass shooters), the vast majority of respondents — 72 percent — were opposed to the idea of banning handguns. That's another big change from 2000, when 62 percent were opposed.

What's perhaps most interesting though is that, according to Vox, a 2012 Pew study suggested that the increase in mass shootings hasn't actually resulted in greater support for gun control. Polls conducted before and after the mass shootings in Aurora, Colorado; Tucson, Arizona; and Virginia Tech found opinions about gun control were largely unchanged in each case, despite public outcry.

...Even Though States With Higher Gun Ownership Also Tend To Have Higher Gun Deaths

Even though many Americans support the right to own firearms, thinking that owning a gun makes them safer, studies have shown the opposite to be true. In a 2014 Gallup poll, the 63 percent of respondents said they believed having a gun in their home made their home a safer place to be — more than three times as many than in 2000. But according to the Harvard Injury Control Research Center, states with higher gun ownership also have the highest mortality rates from gun-related deaths. In fact, the four states with the most guns actually have a mortality rate seven times higher than that of the four states with the fewest guns.

Gun-Related Suicides Are A Major Problem Throughout The Country

While mass shootings like the one at Sandy Hook grab headlines, they certainly aren't the only problem. In fact, mass shootings comprise only a small number of gun-related deaths, according to Vox. The majority are actually suicides by firearm, according to The New York Times — and that's a big problem, given that suicide is the second-most common cause of death among young people 15 to 34.

Of course, restricting gun access won't prevent suicide, but it would make it less likely: suicide attempts involving guns are much more likely to be successful than other methods, according to The New York Times, and if there are already guns available in the home, gun-related suicides are about three times more likely to actually occur, according to The Brady Campaign To Prevent Gun Violence. That's especially true in youth suicides: according to the Center for Injury Research and Prevention at The Children's Hospital of Philadelphia Research Institute, "more than 75 percent of guns used by youth in suicide attempts were kept in the home of the victim, a relative, or a friend."

Accidental Gun Deaths Are Still Also A Major Problem, Despite Many Owners' Claims That They Are Trained

One of the most heartbreaking statistics about gun-related deaths are the accidental deaths that occur — often just as a result of having guns in the home. The Harvard Injury Control Research Center found that, in states where gun ownership was highest, accidental death by firearm was more likely to occur. What's worse is that young people are more likely to die in accidental shootings than adults, and most often they will be shot by someone close in age, "typically a friend or family member, often an older brother."

The risk is enough that injury prevention experts have singled out access to firearms in the home as the "most significant [home injury] hazard" to young children, according to the Harvard Injury Control Research Center. And the American Academy of Pediatrics agrees. Since 1992, the AAP has maintained that firearm deaths are a significant danger to children, and has long advocated that "the absence of guns from children's homes and communities is the most reliable and effective measure to prevent firearm-related injuries in children and adolescents."

According to The Children's Hospital of Philadelphia Research Institute, approximately one of three handguns "is kept loaded and unlocked," and most children surveyed said they know where their parents keep their guns. What's more is that 36 percent of children "admitted handling the weapons," even though their parents had no idea. But it's not just children who are at risk: women in abusive relationships are also eight times more likely to become the victim of homicide if their is a firearm in the home, according to the institute.

The good news, according to DoSomething.org, is that the number of federal background checks being performed for legal gun purchases is increasing, but overall, they are still lacking. Background checks aren't required, for example, to purchase a firearm through a private sale, and, according to the Brady Campaign, approximately 40 percent of gun sales in the United States occur with no questions asked.

The issues surrounding gun legislation have always been hotly debated, and that isn't likely to change anytime soon. It's important to noted that none of these facts include any information that says the gun safety debate is about banning or taking people's weapons that they already have; rather, it's about making the accessibility of weapons safer. On an anniversary of an event that so many Americans never imagined could actually occur — and one that cut 20 incredibly young lives short for no good reason whatsoever — the facts about gun violence seem especially important.