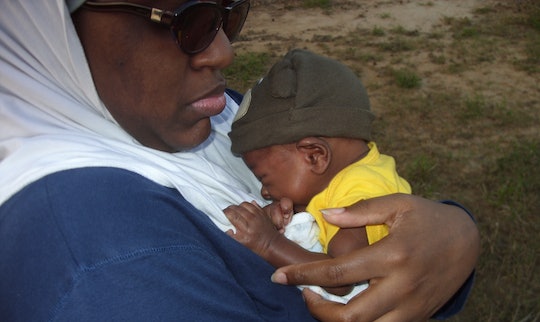 "Failing" Ramadan While Breastfeeding Was Crucial For Me & My Son

My very first Ramadan came shortly after I converted to Islam, and before I had kids. I knew fasting from sunrise to sunset would be hard, but I figured that once you committed to the religion, you were supposed to do the things that were expected of you. I felt like I’d be letting everyone down if I gave up. There were many times that I wondered what I’d gotten myself into. Some of my lowest moments were actually pretty laughable: longingly running my hand down the refrigerator door handle and taking numerous showers, pretending I was a sponge and could absorb water. Fasting is a personal experience, but it becomes public when you’re doing it as a part of a community. I didn’t want to be at one of the community dinners at the mosque and feel like a fraud. I didn’t want to be a weak link. I refused to fail. And I did succeed in the end. But for my second Ramadan fast, I was a new mom breastfeeding a baby.

Moms are often great multi-taskers, but Ramadan puts our abilities to the test. We’re not just trying to spiritually recharge. We’re increasing our spiritual fitness while abstaining from food and drink from morning to night. That’s no easy task while you’re still doing all of your mom duties.

For my second Ramadan, motherhood had blessed me with its own set of special gifts: postpartum depression, high blood pressure, and caring for a baby who wasn’t even 3 pounds. I’d decided to breastfeed because I had heard that “breast was best” and I wanted to give this tiny baby the best chance at success. At the very least, I figured it couldn’t hurt. Despite knowing very little about breastfeeding, I committed to it. Little did I know, this commitment would prove to be troublesome when paired with my commitment to fasting.

Even after supplementing with formula, I still felt constantly ill.

No number of positive, sponge-thinking showers could help how thirsty I felt after breastfeeding. My energy was at an all-time low, and so was my milk supply. Even after supplementing with formula, I still felt constantly ill. I was not enjoying fasting. I felt like there was no way that I was getting any spiritual benefit. I was starving, not fasting. I felt physically and mentally miserable.

For what it’s worth, a study in Pediatrics International found that micronutrients in breast milk (potassium, zinc, and magnesium) were affected by fasting during Ramadan. During fasts, dehydration is also a risk, and can affect milk supply and the health of the mother, per KellyMom.

Still, it took some time to get over the sense of "failure" from my second fast. The decision I made may not have been the same decision another mother would have made, but it was the right choice for me. I found a sense of peace when I remembered the personal nature of fasting and the joy of spiritually recharging. I’d lost focus of these key components, and I made a promise to myself not to make that mistake again.

Our baby boy is 6 years old now. He’s too young to fast, but he has already told me that he wants to try fasting a little so he can get really good at it when he’s older. He’s ambitious, just like I was for my first Ramadan. As we sit around the table making crafts, I tell him of how joyous Ramadan can be, especially when you’re surrounded and encouraged by the love of your natural and spiritual families. That’s success.

More Like This
Your Guide To Taking Tylenol While Breastfeeding
Stop Talking About Formula Feeding Like It’s Always A “Last Resort"
Breastfeeding Twins: Everything You Need To Know
How To Breastfeed A Baby With A Cleft Lip Or Cleft Palate