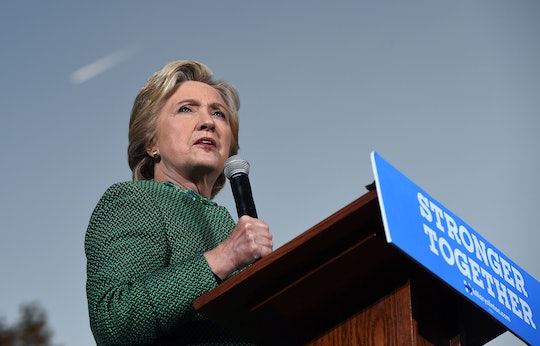 Fake Hillary Clinton Emails That Could Totally DESTROY Her Campaign

At the beginning of October, Wikileaks teased an "October Surprise" that would completely derail the Hillary Clinton campaign, and make tiny-handed steak connoisseur Donald Trump the next president of the United States. Well, it's almost Election Day, and although the hacking organization has released thousands of emails from within the campaign, Clinton is polling better than ever. Still, plenty of people on the internet just know that there are some Hillary Clinton emails that could DESTROY her campaign if they ever see the light of day, and now, those convinced that Clinton is hiding something need wait no longer!

Romper has a totally exclusive, totally fake scoop on all those emails the Clinton campaign doesn't want you to see. Read on, but be warned—the emails reveal some pretty horrifying information.

Saw HRC today. She started watching Stranger Things last night, but told me she does not think that little boy who plays Dustin is talented. When I said he was hilarious, and also admirably raising awareness of cleidocranial dysplasia, she just shook her head and said he was nothing compared to the kid from Two And A Half Men. Then she reenacted the entire pilot of Two And A Half Men for me—she has the whole thing memorized—but because she was laughing so much, it took her 3 hours. I had to stand there and smile for all of it. I am so tired.

We have some rescue puppies in desperate need of new homes. They're very sweet. There's one in particular we think would be a great match for you. His name is Scrappy, and he has only three legs (he lost his fourth saving a child from a well). He is the most loyal dog you'll ever meet. Would you care to play with him, and see if he'd be a good fit for adoption?

To: Women For Hillary

Thank you for your offer to host a pizza party to celebrate the Secretary's performance in the final debate. The Secretary will be in attendance, but she does not eat pizza. Please have a probiotic yogurt on hand for her instead, ideally key lime flavor. Alternatively, you could just change the theme from "pizza party" to "probiotic yogurt party" and she'd feel a lot more comfortable.

Im sorry im sorry im so sorry i didn't mean it. yourre amazing. i love you. its a confusing time for me but im trying to go high i really am. you ARE perfect, and chimamanda ngozi adiche's letter was one of the most beautiful things i've ever read. this is the last time i mix whiskey and raspberry vodka. gnight.

To: The Organization of Secret Alien Lizard People Living As Humans

The time is nigh. Soon I shall take the office of Human American President. Prepare to cast off your false forms. Ready your bellies for the feast. We shall live in the shadows no more.

Scary stuff, America! Guess we'd better ignore all her accomplishments, and elect this guy instead.

Note: The above emails, as stated, are all satire. Hillary Clinton is not a secret lizard queen, nor does she hate puppies, pizza, and Michelle Obama.