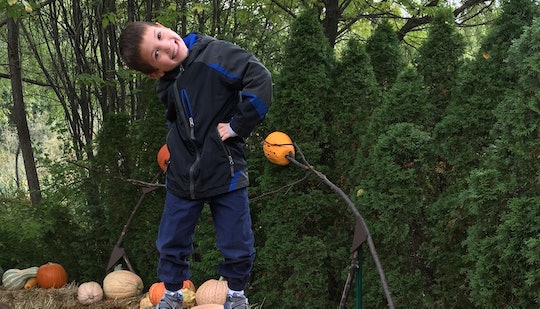 I Refuse To "Tuck Into" A Stew, & You Can Keep Your Fall Propaganda

Summer is over and fall has officially kicked in. As a city-dweller with limited real estate, that means the annual swapping of the seasonal wardrobe. But I’m not ready to embrace the colder weather. I’m a summer baby and after having a fall baby, I put a ~concerted effort~ into timing my second kid to arrive in July. Don’t believe the fall hype about the comforts of fleece and hot cider. Coziness is a lie, especially for parents whose kids always lose jackets.

My children have been growing at a fairly predictable clip since they’ve been born. They’ve outgrown thousands of dollars worth of baffled apparel (and that’s taking into account a significant volume of hand-me-downs we gratefully accepted). Nothing brings that harsh fact to light more than the arrival of fall: the season when you realize it will take more than a stained t-shirt and last year’s shorts (shorter, yes, but that’s OK because they are shorts!) to properly dress a child. We must bundle them. We must tuck them in. We must ensconce them in the warm vanilla aura that protects them from autumn’s brisk breezes.

Meanwhile, the quest for coziness dupes parents into purchasing layers of fleece and corduroy to achieve optimum cuteness for that pumpkin patch photo, when we all know kids are never cold. That’s a theory proven by the number of mittens and hats and sweaters that leave our homes, autographed with our children’s names in Sharpie, never to return.

We’re barely into autumn and I long to return to the sun-scorched days of summer. I could serve my kids a cold dinner without judgment. Now, my social media feeds bombard me with heartier fare. I don’t want to “tuck into” a stew. I refuse to slow roast anything, or soak beans overnight for some chili that needs to bubble all day in the slow cooker, when we all know I’ve got too much going on to remember to turn it on. Fall fare takes more planning. And while I appreciate that it is now much more acceptable to crack open some canned soup to be able to get dinner on the table quickly after a full work day, and the kids’ dance and soccer practices, the complaints really amp up by night three of this routine.

Shorter days are a trick. They’re supposed to serve as our cue to get home sooner, and “hunker down” for the night. Except, my kids don’t hunker: they spin out. With the colder weather, and night closing in earlier, they can’t run around as much. So at the end of the day, they’re simply not as tired. I’m trapped inside with them and we’re supposed to… what exactly? Brew some peppermint tea and play a board game while dressed in flannel and un-lost slipper socks? How cozy. How unrealistic.

That chill in the air? That’s just good parenting.

The kids are old enough now, at 11 and 9, to pick up on fall’s seductive marketing. The drugstore shelves are stocked with fun-sized candy bars, right at their eye level, reminding them what the season is really about: treats. They don’t know what a pumpkin spiced latte is, just that “it’s here!” and their friends tried it and it’s really good, and I’m the meanest mom ever because I won’t buy them one. That chill in the air? That’s just good parenting.

When I was in my 20s, before kids, I bought my first cashmere sweater. Its coziness wasn’t a byproduct of its soft fibers, though. It was cozy because I had been working hard and was responsible about my finances, and had saved enough to treat myself to this very grown-up garment. It was a symbol of adulthood, and it felt wonderful to wrap that around me. If coziness is a feeling, we don’t need the material trappings of fall to experience it.

I was cozy in summer, baking under the sun at the lake with the kids on a day off. I was cozy when we piled onto the raft for a split second before it overturned and we got dumped into the water. Though I want nothing more than to dress my kids in mohair ponchos and jaunty plaid newsboy caps, the golden light of a late September afternoon igniting the fiery shades of the leaves in the background of this idyllic spot where we’re trying to capture just one good picture of the four of us for the holiday card I’ll soon have to make, I know this brand of coziness can only be achieved by a very select group of super-humans who make their own seasonal wreaths (I salute you).

Fall is here, but you don’t have to succumb to its cinnamon-tinged sorcery. It’s just the gateway to a darker realm: colder, and with less candy. Stay strong, summer babies.