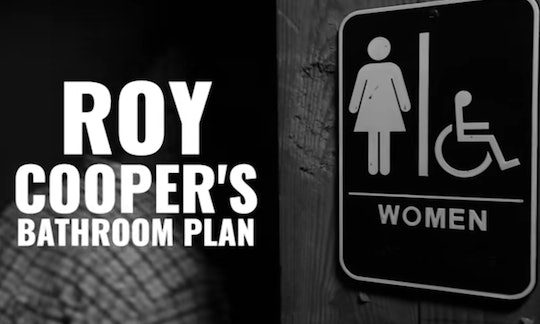 In the fight against transgender bathroom rights, one weapon is a perpetual part of the arsenal: fear. That may explain why an ad introduced in 2015 was repurposed by opponents of North Carolina gubernatorial candidate Roy Cooper, the state's current attorney general and a vocal critic of the controversial House Bill 2. The North Carolina ad on trans bathroom rights suggests that allowing individuals to choose a restroom based on gender identity will lead to rape of women and girls. By perpetuating a harmful idea unsubstantiated by research, the ad attempts to sway an election based on what is largely recognized to be a false premise. But there's a reason the ad is making a reappearance: it's been effective before.

The North Carolina Values Coalition teamed up with the National Organization for Marriage to debut the reworked attack ad on YouTube in October, according to Mic. The video includes black-and-white clips of a bathroom. A young girl is shown entering a bathroom stall. An individual who appears to be a male steps out of another stall, catches the door of the girl's stall as it's closing behind her, and follows her in. Here's the full text of the narration:

Roy Cooper's bathroom plan: What does it mean to you? Any man at any time could enter a woman's bathroom simply by claiming to be a woman that day. No one is exempt. Even registered sex offenders could follow women or young girls into the bathroom or locker room, and no one could stop them. Protect women's privacy. Prevent danger. Say no to Roy Cooper and his bathroom plan. It goes too far.

The bathroom plan ad may be new to the North Carolina gubernatorial race, but Raleigh NBC affiliate WRAL reported that it's actually been used twice before. Its most recent prior appearance came in response to Target's announcement that store customers could use whichever bathroom corresponded to their gender identity. Campaign for USA sponsored the ad (using the same video and much of the same text) during a three-month campaign meant to reverse Target's bathroom decision, according to Houston ABC affiliate KTRK-TV. The ad premiered in its original form in 2015 and is believed to have played a significant role in defeating the Houston Equal Rights Ordinance (HERO).

Given the ad's past success, it's unsurprising that it would be repurposed for a contentious North Carolina election that includes transgender rights as a central issue. The statewide point of concern is House Bill 2, a piece of legislation that effectively prevents transgender people from using the bathroom that corresponds to their gender identity; according to WRAL, the Charlotte City Council had instituted an ordinance designed to protect that right, and House Bill 2 emerged as an oppositional response. The incumbent, Gov. Pat McCrory, supports House Bill 2; Cooper condemns it as unconstitutional.

Attack ads are generally designed to stoke concern and promote outrage, but the bathroom ad is complicated by its distortion of the facts. There are actually researchers working to determine "whether extending public accommodations rights to transgender people leads to more crimes by predators," NPR's Jeff Brady reported. That team at the UCLA School of Law's Williams Institute so far believe the answer is no. Denying rights to transgender people is, however, documented to be dangerous: researchers at the Williams Institute found that 70 percent of surveyed transgender individuals who used public restrooms had "negative experiences," according to The Guardian. Williams Institute Scholar of Public Policy Jody Herman broke down that number for NPR:

About 70 percent of the sample reported experiencing being denied access to restrooms, being harassed while using restrooms and even experiencing some forms of physical assault.

There is no case on record of a transgender individual "attacking someone else in a public restroom," The Guardian reported. But when discriminatory laws are in place, transgender people are at greater risk of being victims themselves. Elisabeth B. Flynn, senior communications director at the Mazzoni Center for LGBT Health and Wellbeing, explained the dangers of discriminatory bathroom laws to SELF:

Anyone can be confronted [in a restroom] at any time for seeming to be 'faking' their gender. The threat is to anyone, trans or cisgender, who does not conform to the 'enforcer's' stereotypes about gendered appearances...It opens up just about everyone to bullying, judgment, and potential physical harm over whether they have the 'right' to be in the bathroom they feel safest using.

The bathroom ad running in North Carolina is meant to frighten, but it's not grounded in fact. There is no evidence that giving people access to the restroom that corresponds to their gender identity jeopardizes anyone's safety, but there is clear evidence that working against trans bathroom rights threatens the safety of transgender individuals and promotes appearance-based policing that could have negative repercussions for everyone.