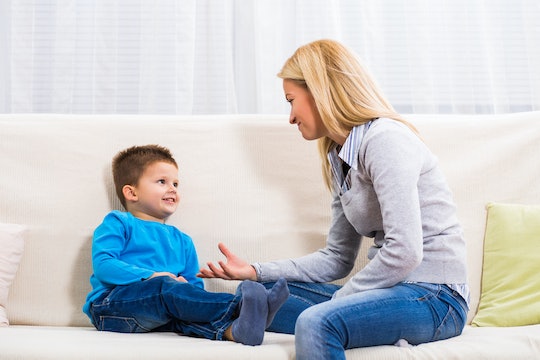 Contrary to what your parents may have taught you, families who feud might actually be better humans. According to recent research, people who are exposed to others who disagree with their views are more likely to let go of preconceived biases. And, because there's a lot on which to disagree from 2017 — ahem, net neutrality — I imagine that heated debates will be aplenty at holiday dinners across the country.

"Families that cultivate a culture in which disagreements are voiced may help raise individuals who are less prone to rely on their personal biases when they make decisions," Virginia Tech’s assistant professor at the Pamplin College of Business Anne-Sophie Chaxel said of her study published in Journal of Consumer Psychology last week, according to Newswise.

The research from Virginia Tech's College of Business, titled "Benefiting From Disagreement: Counterarguing Reduces Prechoice Bias in Information Evaluation," suggests that it is indeed possible to activate a mindset that leads people to question their own assumptions.

"Holiday squabbles to have a functional utility in family circles because they cultivate a mindset that allows individuals to process new information without being tainted by prior preconceptions, in one word, let people be more open-minded," Chaxel added, Newswise reported.

Intra-family belligerence is basically to be expected when it comes to the holidays. Leonard Felder, a Los Angeles psychologist, found that about three-quarters of us have at least one family member who annoys us, according to CNN. As such, the internet is ripe with advice columns on avoiding or mitigating family conflicts. One Huffington Post article even advises picking up the phone to talk things out prior to family gatherings, reinforcing that "these discussions should be loving, empathetic and free from warnings, anger or criticism."

Back in 2013, The Atlantic writer Olga Khazan proposed four theories as to why our families drive us nuts — typically more so than our friends. She describes "social allergens," "passive aggression," the fact that "sibling rivalries don’t stop at childhood" and, perhaps most relevant to recent research, the "narcissism of small differences."

Social allergens are just those "small things that don't elicit much of a reaction at first but can lead to emotional explosions with repeated exposure," according to the book Annoying: The Science of What Bugs Us. They include those uncouth bad habits, like cracking knuckles and checking phones at the dinner table. Simply, their repetition can trigger conflicts.

Passive aggression, Khazan explained, is also "a common culprit behind petty quarrels, but it's usually developed as an adaptive behavior." She adds that "the passivity is a way to avoid breaking what the person feels are arbitrary social rules, like having to make the mashed potatoes just so, or being compelled to listen to unwanted parenting advice from an elder."

As for sibling rivalries, well, studies show that adult siblings experience conflict and rivalry, even if they no longer live with each other or their parents.

And Khazan explains the "narcissism of small differences" by citing Sigmund Freud's theory that those who live near one another and are ethnically similar are typically the ones who fight bitterly. (Read: Spaniards and the Portuguese, the North Germans and the South Germans, the English and the Scots.)

In other words: 'It is precisely the minor differences in people who are otherwise alike that form the basis of feelings of hostility between them.' This might be because we tend to remember and value the differences between ourselves and others more than we do the similarities. To this day, Freud’s theory is used to explain the factors behind certain civil wars.

The same goes for family gatherings around the holidays, which, at times, can feel like a civil war. But the new Virginia Tech research would argue that this is all OK.

In fact, Chaxel explains that one of the reasons biases are so rampant is rooted in the human need for "cognitive consistency," which simply means processing information in a way that confirms preset beliefs, according to Science Daily. "Usually we think we are objective when we make decisions, but we are very subjective," Chaxel said. "People unconsciously distort information to confirm their pre-existing beliefs."

As Newswise reported, Chaxel "was able to disrupt" the cognitive thinking process by providing statements to participants in the study and asking them to write why they agreed or disagreed with the statements. For those that disagreed with the statements, they were found to be less likely to be susceptible to influence from bias that either already existed or had become a tendency over time, Newswise reported via the study.

Chaxel explained in her study that by exposing ourselves to differing viewpoints, for example, politics, we teach ourselves how to process information, leading it to make us "more objective."

It's no secret that disagreements could be a healthy antidote for biases. Dr. Bonnie Ray Kennan, a marriage and family therapist, told Huffington Post, that couples who have "mastered the art of arguing" tend to take emotional conversations and disagreements slower. "Starting a difficult conversation softly and respectfully dramatically increases the chances of a good outcome," Kennan told HuffPo.

"When taboo or uncomfortable topics remain unaddressed, they can turn any benign event into a big drama that could have been avoided in the first place," Diane Sawaya Cloutier, an author and relationship expert told The Huffington Post. "Couples who talk about it can manage potential dramas."

Spouses or siblings, all of us can manage drama if we tread lightly — and thoughtfully. Whether it's your anxiety-inducing mother, cold mother-in-law, that drunk uncle or your "he's-just-old-school" grandfather with whom you're anticipating conflict, understand that it's to be expected, it's likely not insurmountable and you'll probably walk out a more open-minded person because of it.

So instead of going to grandma's donning your holiday sweater with guns blazing, just fork over the baked goods you brought along, pipe down and listen. When conversation takes a turn for tax cuts — and it will — don't worry so much about what it is you're arguing, but perhaps how it is you're arguing.