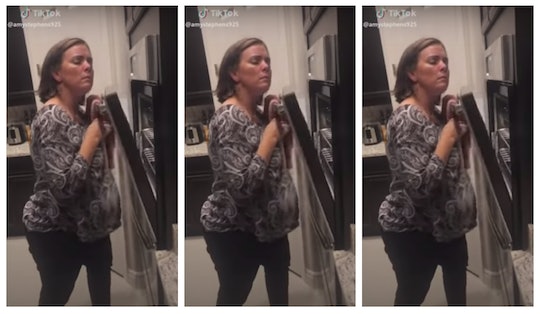 Families Who TikTok Through Isolation Are Onto Something, Say Experts

I have begun to think in TikToks. I see days flipping from one to the next without my ever blinking; I rise and kick my heels down the hall again and again, as if I’m in a movie montage; my children's voices take on the beat of a remix as they tell me about their, their, their, um, their, um. I have not yet made a TikTok with my family, but with every passing day of isolation, more families the world over (J.Lo and A-Rod among them) are deciding “get in formation, we’re going to recreate the dance for Blinding Lights.”

Ilana Wiles, the blogger behind Mommy Shorts, made her first TikTok in March, the week before she was quarantined in her home for COVID-19 (she has made a full recovery). Her 10-year-old, Mazzy, was asking to download the app, and Wiles figured “Why don't I make this something fun that we can do together, as opposed to the scary thing that she's doing in secret with her friends?”

She has since made a series of TikToks with her two daughters, the three of them taking turns directing, filming, scheming, and starring in the videos. In one, they form a band in the kitchen; in another, the girls pull off the Harry Potter broom trick; in yet another, they do the “Savage” dance challenge. Some of Wiles’ favorite TikToks are intergenerational — grandparents show up to dap, moms get the punchline in their teens’ videos; like families themselves, the visual memes are iterative. One of my all-time favorites is this Floridian mom squeaking an oven door to Usher’s “Yeah” (#YEAH).

The platform allows you to sample music, such that popular TikToks are surfaced to lots of users in their “For You” feed, and those users in turn create their own variations on those TikToks, the original idea mutating along the way, not unlike the virus responsible for penning us into our houses and apartments in the first place.

“You'll have a doctor using that song to give medical advice, and someone who's a psychologist using it to give advice about anxiety, and then you'll have a police man who's doing it about safety,” says Wiles. Users can not only share videos on the platform, but make and download them, sharing TikToks to other platforms or via text.

If Instagram is a dance solo, Tik Tok is more of a flash dance taking place at thousands of homes around the globe, with a slight time delay. A trend begins in one form, and changes as it filters through to the #momsontikok and #toddlersontiktok waiting for a good challenge — people like Vinita of @tallinkedlady.

While new technology is often met with a panic, there can be upsides to participating with your children on platforms like TikTok, says Andy Robertson, a journalist and author of Taming Gaming: Guide Your Child to Video Game Health. “I think the actual benefits aren't the short-term interactions,” though it’s fun to coordinate a dance routine, Robertson says. “The longer-term benefit is discussing the medium.”

By learning what TikTok is, how it works, and what kinds of videos your child likes, “it means that you have equity in this space to talk about it” when it comes to setting limits.

“If you just let your child get on with any media on their own, they will come unstuck probably, whether that's books, video games,” or so on, he says. Robertson advises that parents create an ongoing dialogue with their children about the media they are consuming.

"The platform is not created with little kids in mind," says Sierra Filucci, editorial director of Common Sense Media, a nonprofit that provides digital advice and recommendations for parents as well as policymakers. Filucci warns that the platform hosts mature content with cursing, sexy dancing, mature lyrics, and so on.

After coming under criticism for child safety standards, TikTok recently rolled out “Family Pairing,” which allows parents to disable comments and keep control of their child’s account. Filucci also recommends device controls like Screen Time on iOS or Family Link on Android. "The TikTok algorithm will adjust to show more content that users interact with, so if kids are liking or saving age-appropriate content, the mature stuff will lessen," she says.

Once you have the app in hand, the upsides are real. "Besides copying dances, some families are creating their own routines and setting them to music, thanks to TikTok's vast song library," says Filucci. "The time spent choreographing, practicing, and editing these videos can lead to stronger parent-child connection (but also some arguing!)."

"My 12-year-old daughter, who is reluctant to get out and exercise, spent all day yesterday learning a TikTok dance," chimes in Susan Skinner, Common Sense Media's director of communications. "She was moving and grooving and completely sweating and exhausted by the end of the day. It was great!"

Romper’s managing editor April Daniels Hussar needed just a couple of weeks of isolation to cave and make a dance video with her teenage daughter. “The secret is to film it with the music in slow motion so you can get all the steps in!” she says. And yes, it provided some good conversation. “After Isabella posted it I kept asking her if we had any good reviews from her friends on Instagram,” my boss tells me.

Social media should be a part of family life, if your kids are using it, says Robertson, who has three teenagers. “We have an hour after tea where everyone gets to pick a YouTube video to watch,” with bonus points for the person who digs up a real classic.

With schools closed across the U.S., screen time has ballooned, which is OK, for the most part. For parents who are wary of digital pastimes like gaming or social media, there is an abundance of literature speaking to its possible benefits.

If your child is spending too much time playing a game, it's important to ask why, rather than to simply demand that your child shut it off. Robertson notes that while there is correlation between depression and video games, for example, causation has not been shown.

A 2007 paper found that massive multiplayer role-playing games (MMPORGS) offered players "therapeutic relief," and that some players felt “more themselves” during game play. Around three-quarters of gamers formed friendships through the platform and yes, I would consider TikTok a MMPORG — we are all in that strange matrix together.

It is fun for parents, I speculate, because it's very hard to wade into parenting wars or worry too much about your brand in the app. Much of the content is absurd, or requires you to loosen your inhibitions (hips). No one particularly cares whether you attachment parent or use glass milk bottles, only whether the video is funny or in the right spirit.

And there, it turns out our kids are the experts.

Wiles recently considered adding in a swear word to a TikTok she was making with her older daughter. “No, you can't use it!” her daughter said. “You're a family-friendly brand!”

More Like This
What Is RSV?
Here’s Your Guide To Paced Bottle Feeding
This Is What It’s Like To Parent With OCD Right Now
Widows Are Expected To Mourn Forever — How Do I Date Again Without Shame?