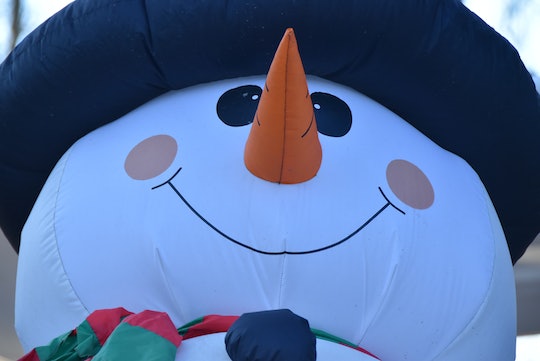 While department stores may put out Christmas decorations before Halloween has finished, one Texas homeowners association has officially declared it too early for twinkly lights, snowmen, and Santa Claus. A family was told to take down their Christmas decorations after putting them up Nov. 1, NBC News has reported. With a new baby expected to arrive on Christmas day, the family told the news outlet they wanted to get a jump start on their holiday to-do list.

At a time when most families were only just beginning to think about packing away their Halloween costumes, Claudia and Nick Simonis were putting out a handful of inflatable Christmas decorations, including a snowman, a reindeer, and a Santa helicopter. But it seems not everyone was excited to share in the Simonis family's holiday cheer so early on. In an interview with local NBC News affiliate WOIA, the San Antonio couple said Diamond Association Management & Consulting, their neighborhood homeowners association, told them to remove the holiday decorations as they were in violation of the homeowners association's rules.

"Holiday Decorations Need To Be Removed," a maintenance notice sent to the Simonis family on Nov. 4 read, according to WOIA. "Please remove the snowman until closer to the holiday season."

As NBC News reported, the letter does not specify exactly when the homeowners association thinks it is acceptable to put out Christmas decorations. It does, however, note that holiday decorations should be removed within 10 days from the holiday. Romper has reached out to Diamond Association Management & Consulting for additional comment but has yet to hear back.

But the Simonis say they aren't just arbitrarily putting up their Christmas decorations. Rather, they're trying to prepare while they still can. As CNN reported, Claudia is eight months pregnant with an expected due date of Dec. 25. "We just wanted to get everything set up, so that way, we can relax," CNN reported Nick said in an interview. "If the baby comes early, we don't have to worry about it."

What's more, the couple has no plans to take their decorations down as the homeowners association has requested. In fact, Claudia told WOIA it was difficult enough to get the decorations up at eight months pregnant that she likely wouldn't be able to do it in a few weeks time. "I feel kind of heavy, so the earlier we can put out the decorations, the better," she told WOIA. "Because probably in two more weeks, I'm not going to be able to build all this."

After hearing about the letter — and the family's reasons for decorating early — some of the Simonis' neighbors have reportedly put out their own Christmas decorations in a show of support for the family, according to CNN. As for the Simonis? Well, they told the cable news outlet they planned to continue putting up their Christmas decorations as originally planned this weekend.