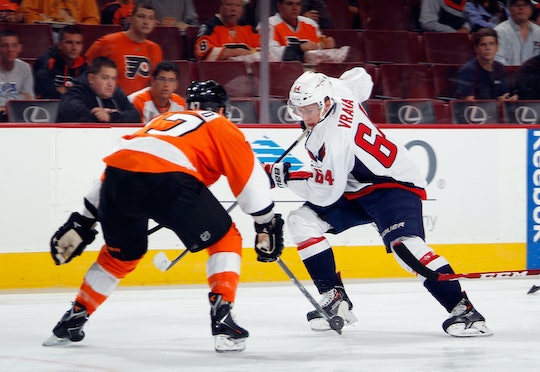 As if you didn't already know the world was a competitive place, new footage on Twitter from the Washington Capitals revealed a heartbreaking moment at Monday night's game: A fan stealing a hockey puck meant for a kid... and even the team was confused at how someone could just do that with no apology, and in plain sight.

Earlier this week, before a game against the Canucks on their home turf in Vancouver, Washington Capitals goaltender Braden Holtby wanted to do something nice for some young fans, so he stopped and tossed a puck to some young ones on the other side of the glass wall. Before it reached any of the little kids, though, a young man, probably an older teenager or guy in his early 20s, reached over and grabbed the prized puck for himself, while a female companion laughed and gave him a high-five.

This was, of course, cringe-worthy, and good for the team for calling out the bad behavior. But Holtby wasn't really into letting them get away with that. He stood his ground and shamed the puck-stealer, giving him a good stare-down. Take that, bad manners! Of course, fans chimed in on the incident.

"Sad part is that it happens all the time," reacted one fan, while another made things pretty clear in one word: "Idiot.""

"I think I just came up with the backstory for the next Friday the 13th series," chimed in a third.

Romper reached out to the team for comment, but had not heard back at the time of publication.

In a strange twist of fate, however, this is the third time since the spring that older fans have intercepted pucks intended for kids at Capitals games, People confirmed. Holtby tried to gift another souvenir puck at a game about two weeks ago, but the puck was snatched up by a man in a business suit. That time, Holtby indicated the adult should move so that the little kid nearby could catch a souvenir of their own.

Another take on the adults-grabbing-pucks-from-kids issue? How about an adult man grabbing the puck meant for a little girl... to give it to a boy. That was the drama at another Caps game back in April, as Scary Mommy reported. Capitals right winger Brett Connolly tried to toss a puck to a little girl, Keelan Moxley, 6, only to find the pucks getting intercepted by an overeager man... who then passed the booty to boys nearby.

Finally, Connolly pounded on the glass as a warning to the Tiger Dad (sorry, he asked for it), and on his third try, the puck was given to a beaming Moxley, a huge fan.

It's likely you can expect more schooling of fans on what is fair behavior in the future from these awesome athletes, if these sorts of things keep happening at games.

I'm only sorry that this week's kiddo didn't get a fair chance at a souvenir from what may have been their first hockey game. Hopefully, they learned that some adults (or near-adults) can also show kids how not to behave.