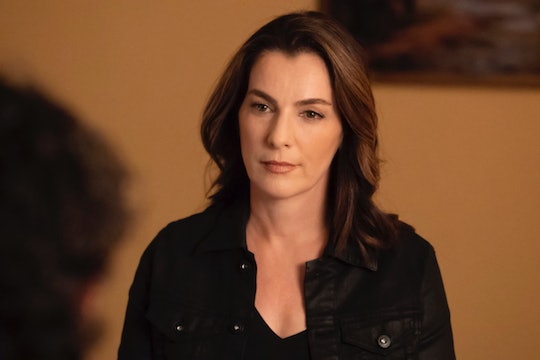 Fans Think Landon's Mom May Be Hiding Something On 'Legacies'

Landon Kirby’s origins have been shrouded in mystery on Legacies, but fans finally got to see him in rise from the dead like a phoenix. His mom, Seylah, revealed that he was conceived in Malivore, which means he could have inherited the supernatural resurrection gene from his father. But now that Landon is facing the Malivore pit that Seylah jumped back into, fans are piecing together some cool theories about Landon’s mom on Legacies.

In Episode 8, Seylah told Alaric that she once worked for Triad, the organization that guards the portal to Malivore — a black pit that consumes supernatural beings and imprisons them into its void. She said that she was tasked with bringing in magical creatures for the company, but over time she would have memory lapses. Eventually, she snuck into see the black pit for herself, and somehow ended up in Malivore. Seylah noted that she doesn’t remember any of her time in Malivore, but that when she came out, she was pregnant with Landon.

After telling Alaric the story — who then told Hope and Landon the details — Seylah went back to the pit, and somehow was able to erase everyone’s memories of her, except Hope. Triad’s mysterious agent, Ryan Clarke, found a file on Seylah that confirmed she was absorbed by Malivore 20 years ago, but he was genuinely surprised that she managed to make it out.

Before jumping back into Malivore, Seylah told Hope she was going to do something that would make things right for Landon, but what she meant is still unclear. Some fans think Seylah knew that Landon would be the key to unlocking Malivore, which is why she stayed away from him in the first place. “Seylah automatically believed Landon right after he “activated” the urn and a monster came running at him,” wrote Redditor ForeverTirredd. “So I’m guessing that Landon’s dad must’ve let her in on his plan and how Malivore worked, or else how would she know to trust Landon only after activating the urn.”

Seylah said that she didn’t remember her time in Malivore, but some fans think she may have been in love with Landon’s father, who is now trying to get out. “Landon is obviously the son of the big bad Malivore was originally created to trap who fell in love with his mother after she was pushed in, and was working on a way out but used it on her after she got pregnant,” wrote Reddit user DreamCyclone84. “Not remembering her epic love, Landon's mum gives him up.”

Another Redditor, Kaerei, thinks that the love for Landon’s dad in still in her subconscious mind, which is why she jumped back into Malivore. “Landon’s mom remembers her time before Malivore, but not her time in Malivore,” wrote the user. “But she was also seemingly more than happy to jump back in? Maybe memory residue of being happy in that other world with Landon’s father? At first, we thought that Landon was an immaculate conception by Malivore, but finding out that he’s actually a Phoenix, a “mythical creature” kind of proves this theory — That Landon’s father is also a Phoenix and is on the other side of the Malivore portal.”

Now that Landon is in the hands of the Triad and facing the Malivore pit, he may finally get some clear answers about his parents. The season finale is right around the corner, so fans will just have to wait and see what revelations come down this supernatural pipeline.