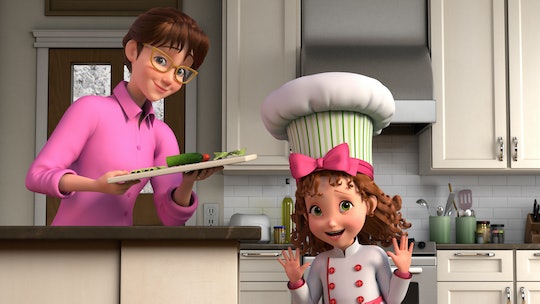 If your little ones are enjoying Disney Junior's Fancy Nancy you may be excited to learn that the show has a series of Fancy Nancy shorts coming out this spring. The first in the FIY ("Fancy It Yourself") series finds Nancy prettying up her snack plate by fashioning a flower out of vegetables — with some chopping help from her mom (voiced by How I Met Your Mother's Alyson Hannigan), of course.

Fans of the 2005 children's book will know, but 6-year-old Nancy Clancy simply adores all things fancy. Yet, she often finds herself surrounded by ordinary people who have yet to discover its joys. The FIY series features tutorials in which Nancy helpfully teaches the people around her (and viewers at home) how to creatively improve ordinary situations. There will even be a fancy Easter-themed episode on Apr. 12.

The shorts premiere Apr. 8 on the Disney Channel, beginning with "How To Make A Flower You Eat," but you can watch an exclusive sneak peek of the full episode below. There are 10 FIY shorts in all and they'll also be made available to stream in the DisneyNow app, so you won't have to miss any.

The animated series is based on the children's books of the same name by Jane O'Connor. The first Fancy Nancy book famously spent nearly two years on the New York Times bestseller list, and launched a series of over 80 books. In 2012, it was announced that a live-action Fancy Nancy film was in the works, according to Entertainment Weekly, from Night at the Museum's Shawn Levy. Tina Fey was even in talks to join him as an executive producer. But because Fox had acquired rights to the books in order to make the film, Disney Channel's Executive VP of Content & Creation Strategy, Nancy Kanter — who'd had her eye on making a Fancy Nancy series for Disney Junior — was blocked from pursuing it.

"We said, 'Oh well, maybe someday,'" she told Variety in an interview last year. But the film never got off the ground and Fox's option expired. So, Kanter met with O'Connor and the books' illustrator Robin Priess Glasser and the trio obviously hit it off. "We were able to tell them what we really loved about Nancy, that we understood what was so unique and special about her," Kanter said.

In addition to having Hannigan voice Nancy's mom, Fancy Nancy has former The Daily Show correspondent Rob Riggle as Nancy's dad. Iconic actress of stage and screen Christine Baranski voices Nancy's neighbor, Mrs. Devine, and Tatiana Ali, Kal Penn, and Chi McBride all have voice roles on the series, too. Fancy Nancy even staged a mini Cheers reunion in one episode by casting John Ratzenberger and George Wendt (better known to Cheers fans as Cliff and Norm) as Nancy's two grandfathers. The series has been renewed for a second season, so good news for kids who like getting a little fancy.

Editor's note: an earlier version of this article incorrectly stated that Fancy Nancy was in its second season.