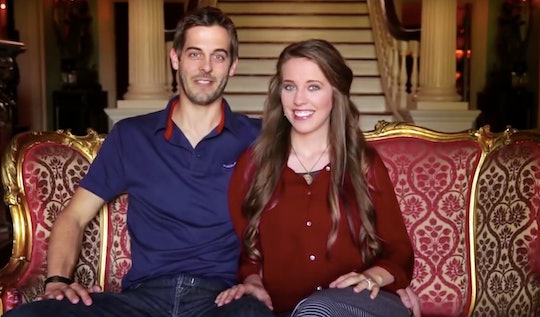 When it comes to picking apart hidden messages, there's reading between the lines and then there's just... reading the lines. Though there's no real way to know what's happening inside someone's marriage, relationship, or home life without them explicitly telling you, some fans are convinced that Jill Duggar is calling out her husband in her latest Instagram post, and the purported allegations are pretty serious.

The Hollywood Gossip reported that Duggar posted a photo of herself reading the bible while watching over her son. However, eagle-eyed fans began to notice that a certain long passage on one page was completely highlighted, and the text itself was a warning about adultery. "Praying for my hubby and boys this morning!" Duggar captioned the post, prompting many fans to wonder, and posit in the comments, whether or not Duggar was sending a message about her husband, Derek Dillard's, possible infidelity.

"And no one else has noticed that she's praying for her husband under 'warning against adultery?'" read one comment. "You should pray for your husband to open his mind and be kind to others even if they are gay or transgender. I follow everyone of your family and watched so many shows. The kindness and love in your family is what I love! Therefor I find it so hard to understand that some of you are so outspoken against other people because of who they love or who they are," said another.

However, it pretty much goes without saying that assuming Duggar is implying her husband has an issue with infidelity is a bit of a stretch, as some other commenters pointed out. "There are exactly 31 Proverbs. Enough for one day each month. Today is the 5th... that’s why she’s on Proverbs 5. But a wife should pray for her husband to avoid adulterous situations. Why would you not?" said one follower. "She’s also praying for her sons, maybe she’s praying that they will guard their hearts against lust," said another.

Though it's impossible to say whether or not Duggar's choice to snap a photo of this particular bible study session means anything more than just documenting a sweet moment with her family, fans did use it as yet another opportunity to bring up some of the controversies that have surrounded Duggar and Dillard over the past few months.

People reported in November of last year that Dillard spoke out openly against TLC, the network that employs him via his in-law's show, and more specifically, their choice to air a show documenting the life of Jazz Jennings, a transgender teenager. It all came to light after a series of tweets he posted, claiming it to be a "reality show which follows a non-reality," and that "'Transgender' is a myth. Gender is not fluid; it's ordained by God."

Fox reported the same month that in the aftermath of the posts, Dillard severed all ties with TLC, prompting many to wonder how he and his wife would support their growing family as they would no longer be featured on 19 Kids & Counting or Counting On. However, fans soon learned that the family earns their income as Duggar works as a midwife, and according to Instagram, Dillard is now a licensed, and practicing, minister.

Though it's wrong to make assumptions about the lives and relationships of others, what's clear is that Duggar and Dillard have gone through challenges in their marriage, just like anyone else. Whether or not Duggar's latest post was an indication that there's more going on than fans know about, that's yet to be seen. If the couple decides to share more of their personal lives with the world, they will. Until then, the reality is anyone's guess.

More Like This
Alec & Hilaria Baldwin Welcome Baby #7, And Revealed Her Cheerful Name
Zaya Wade Is Rocking New Long Hair & As Gabrielle Union Put It, She's A "Vision"
Serena Williams Shares How Her Daughter Comforted Her After Losing A Big Match
George Clooney Really Regrets Having His Twins Learn A Language He Doesn't Speak