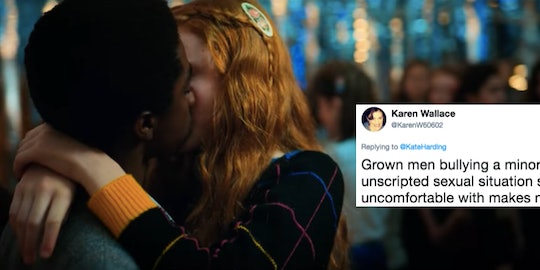 The internet erupted in anger recently, responding to new info regarding a remarkable Stranger Things moment between two teen actors. If you haven't watched the latest installment, be warned that this article has multiple spoilers. According to a Beyond Stranger Things interview from the cast, as Mashable reported, the Stranger Things creators added an unscripted kiss to the second season — a kiss that 15-year-old actress Sadie Sink seemingly wasn't ready for. Romper has reached out to Netflix and representation for both Sink and the Duffer brothers for comment, but has not heard back at this time. This post will be updated with comment when made available.

Teen actors kissing on-screen is often seen as acceptable, given that the situation is handled delicately and the physical contact is consensual between parties. But, in Netflix's behind-the-scenes look at the production, Beyond Stranger Things, people who watched it felt the directors didn't take Sink's concerns with the scene very seriously. Though Sink maintains a light tone in the interview, she explains how the scene made her "stressed out." Despite her nerves, as she expressed in the interview, the directors insisted that Sink (who plays Max), have an on-screen kiss with 16-year-old Caleb McLaughlin (who plays Lucas).

In the behind-the-scenes clip, Sink was asked what it was like to shoot the scene. "You didn't ... ", Sink starts to respond as she points at directors and producers Matt Duffer and Ross Duffer (called "the Duffer brothers"). Ross then interjects, "This is all your fault though."

"It is not my fault," Sink said. "The kiss was not written in the script." She explained in the clip how the final dance scene (called the "Snowball") changed:

I get there, the first day of filming the Snowball and walking in I see the decorations and stuff. One of you, I think it was you Ross, you say, "Ooh, Sadie, you ready for the kiss?" I’m like, "What! No! That’s not in the script. That’s not happening." So the whole day I was like stressed out, I was like "Oh my god, wait, am I gonna have to… is it gonna happen, is it not..." and it didn’t happen that day, but then the second day of filming the Snowball.

While Sink relayed the story, the Duffer brothers smile at her. "You reacted so strongly to this. I was just joking and you were so freaked out that I was like well, I gotta make her do it now. That's what happened," Ross told Sink in the same interview.

In addition to the kiss being an unscripted surprise, the intimate moment was made explicitly public. "It didn't help that our first kiss was in front of, like, 200 actors, and their parents and the crew and my mom," Sink said in the same Beyond Stranger Things interview.

Although Sink has yet to address the internet's response to the interview and the scene, this hasn't been sitting very well with fans who have criticized the Duffer brothers for switching things up on Sink in the moment:

Others found issue with the unnecessary sensuality of the situation:

Even before the interview circulated, some were upset by the decision:

Still, some have expressed that the commentary has been blown out of proportion, projecting that it was just the "first kiss" aspect that was daunting for Sink:

Beyond Sink's worries and feelings about the matter, the language used by the directors to justify the decision to encourage unanticipated physical contact is disturbing. "I gotta make her do it now" and "that's why it's your fault" are especially upsetting given the power dynamic of two grown, male producers over a young teen actress — and fans were ready and willing to point that out.