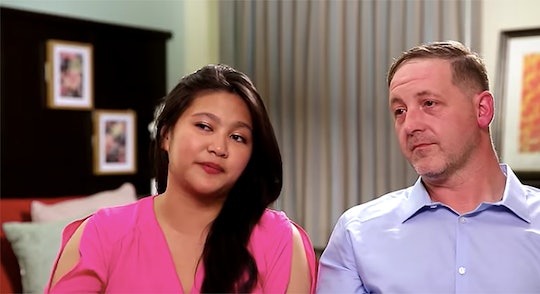 Wait, Did Leida & Eric On ’90 Day Fiance’ Leave Their Child Alone In The Car?

If you're a 90 Day Fiancé diehard, you probably noticed that fans can't stop talking about how Leida and Eric supposedly left their sleeping child alone in a car. The moment is especially noticeable because Eric is trying to be a father figure to 5-year-old Alessandro, and some people are wondering if he's up to the task.

On Sunday's installment of 90 Day Fiancé, Eric met Leida's immediate family — who hail from Jakarta, Indonesia — for the first time. Meeting your S.O.'s loved ones can be a daunting task in itself, but there was extra pressure for Eric because Leida's parents are very wealthy. Viewers learned that Leida's dad is a famous surgeon, while her family only stays in five-star hotels. Talk about swanky.

Considering Eric is a middle class guy with child support payments, it's understandable he felt nervous about impressing Leida's well-to-do mom and dad.

Eric's nerve-wracking journey started immediately after he picked Leida's family up from the airport in New York. But instead of sightseeing in NYC, reasonable Eric (seriously, props to the guy for living within his means), booked a cabin in Pennsylvania for the family rest in overnight. The following day, the gang planned to depart on a 15-hour road trip to Eric's home in Wisconsin.

Once the family arrived at the cabin, it was already nighttime. Alessandro had fallen asleep during the drive from New York to Pennsylvania, so the group decided to leave him in the car while they got settled.

Although Alessandro probably wasn't alone alone in the car considering the cast is surrounded by a camera crew at all times, many fans took to twitter to shade Eric and Leida's decision.

"They just gonna leave Leida's baby in the car?" one person asked. "In the parking lot? At night? #90dayfiance."

Someone else said: "Eric wants to show Leida's family he can be a good dad, but also just left Alless in the car asleep like it was no big deal #90DayFiance."

Another person chimed in: "Leaving Alessandro out there in the car with the mountain lions and squirrels and sh*t #princessleida #90dayfiance."

"#90Dayfiance IN CAPS I YELL THEY LEFT THE BABY IN THE CAR...ALONE!," one person tweeted.

It's important to note here that most states have laws regarding leaving children unattended in cars. As for Pennsylvania? "A person driving or in charge of a motor vehicle may not permit a child under 6 years of age to remain unattended in the vehicle when the motor vehicle is out of the person's sight and under circumstances which endanger the health, safety or welfare of the child," according to the Pennsylvania General Assembly.

Of course, the situation with Leida and Eric isn't exactly clear. Viewers don't know if Alessandro was actually alone (this is doubtful given the whole filming a reality TV show thing), or if the scene was edited. Translation: fans can't judge a situation until they know the full story.

Another thing to consider? If Leida and Eric did make a misstep in this case, I'm sure they'll learn from their mistakes. It's clear they both love Alessandro very much, after all.