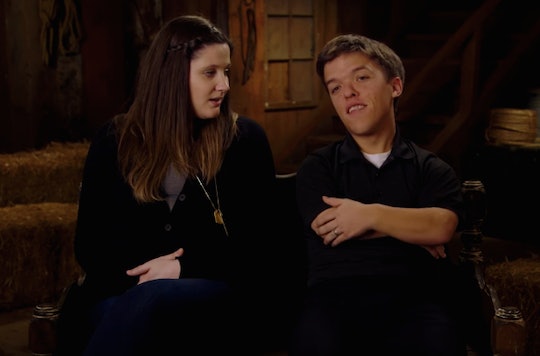 New parents have a sharp learning curve, getting the hang of operating on little to no sleep, feedings, diaper changes, and much more. But in today's world with social media a near prerequisite for proper parenthood, they have to learn about something else too: shaming. Fans are shaming Zach and Tori Roloff for a family photo that shows their new baby Jackson sitting on a riding lawn mower with his dad. Concerns over the safety of the child apparently led them to share their wisdom in the comments section, but Tori was quick to respond to her critics.

Zach and Tori welcomed their little boy on May 12, 2017, and have been enjoying their new lives as parents ever since. They opened up to People about the adjustment and how they were faring in the early days. “We knew we were leaving our previous life behind, but we were okay with that,” Zach told the magazine. “We’re not doing things on our schedule anymore. We’re on Jackson time!” Jackson time, among other things, meant getting around four hours of sleep per night and Tori nursing at a rate of 11 times a day.

Their sleep schedule wasn't the only thing that changed with parenthood though. Even when not appearing on Little People, Big World, the Roloffs are well in the public eye — especially as parents. Tori certainly learned that when she posted a few family photos to Instagram of baby Jackson playing around the farm. She captioned the photos, “It’s everything you ever want. It’s everything you ever need. And it’s here right in front of you. This is where you want to be.” But fans focused on the first photo more than anything else, expressing their alarm that Zach would hold Jackson while on a riding lawn mower.

Several of Tori's followers left comments shaming the parents for allowing Jackson on the mower. One such user wrote:

No one should ever ride a child on a mower whether the blades are running or not. This is so dangerous. I’m not a hater. I think Zack’s family is sweet. Please rethink the mowers rides.

Another echoed these sentiments, saying:

Do you realize how dangerous that is, there have been multiple cases of children falling off, just by a simple bump, and the child has lost limbs of [sic] not death. Please think and act to keep the child whole and alive please.

The comments were enough to lead Tori to edit her caption for the photos, according to Café Mom, adding the disclaimer: "GUYS. THE MOWER WASN’T ON." But Jackson's location wasn't the only thing that users felt the need to comment on. There was also the issue of Jackson being dressed in nothing but a pair of overalls and a shirt. "Looks like Zach is nice & warm! Poor Jackson no shoes no jacket!!" one person said. Ugh.

Fortunately, not everyone was so quick to judge. Some of her followers even jumped to her defense. One user said, "Lol!!! @toriroloff what would you do without all this "help?" I'm sure photo comments are where you come for parenting advice. Lordy." Another commented on how ridiculous people were for thinking that a mom would purposefully endanger her child:

Obviously, people, she is not going to endanger her child on a moving mower! It was a still shot! Don’t be so quick to jump to conclusions! It is an adorable photo, as are all the rest!

These photos are not proof that Zach and Tori aren't looking out for their little one — quite the opposite. Following the initial hurdles that come with infancy, it looks like their family is happy and flourishing. Whether or not they choose to showcase that joy on a riding lawn mower is no one's business but their own.