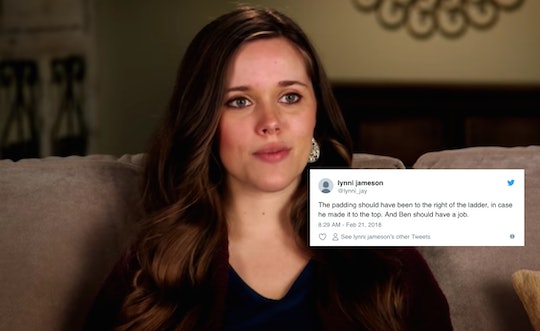 Reality star and mom-of-two Jessa Duggar regularly shares glimpses of her life on Instagram, and while most of her 2 million followers seem to love it, there are plenty of people who are more than happy to point out everything she's supposedly doing wrong. Duggar has been judged for letting her son have a bottle, for example, or for "letting" her toddler throw his dad's phone in the toilet (news flash: kids don't ask for permission). In her latest post, fans are still criticizing Jessa Duggar's "messy house," according to In Touch Weekly, but honestly it's time they gave it a rest.

To be fair, we do happen to live in a time when it is entirely possible to make a comfortable living by sharing a perfectly-posed and curated life on Instagram, and there is an entire subculture of young, beautiful mothers on social media with huge followings, thanks to their superhuman ability to raise adorable, photogenic children in all-white homes while seemingly looking effortlessly glamorous at all times. If you aren't a mother yourself, you might even think that those accounts depict something that is totally realistic and attainable. But for many of us, daily life with little ones more often resembles what we see from Jessa Duggar — and, let's be honest, sometimes even that feels like an unattainable goal.

On Wednesday, Duggar posted a sweet video of her 1-year-old son, Henry, playing in their living room on a plastic kiddie slide, and it's clear he's having a blast. Duggar's husband, Ben Seewald, can be seen checking in with little Henry while grabbing a quick bowl of cereal, and although it's the kind of video that pretty much every other parent in the world has taken of their own baby, it didn't take long before commenters started calling her out for everything she was supposedly doing wrong.

For one? Duggar's living room was apparently cluttered. One of Seewald's shirts is laying across the back of the couch (presumably because he came home from work and took it off, which is the first thing my own husband does before getting clobbered by our excited 5-year-olds), and on the ground, there are blankets and pillows there to shield Henry from hurting himself (a fact that Duggar had to specifically note in the video's caption, likely because she knew she'd get grilled if she didn't).

At one point in the video, Seewald can be seen kicking some other small toys away from the slide, which some commenters took issue with — apparently the only correct action would be to pick them up and put them away — and one user even criticized the couple for "teaching [Henry] the wrong way to use a slide." Add that to the fact that, apparently, allowing your child to play on a small slide is dangerous in general, and it seems that, once again, some are convinced that Duggar is a bad mom.

Of course, it isn't the first time that Duggar has been shamed by internet strangers for the way her house looks in photos. In October 2017, she shared a series of pictures on Instagram showing what it really looked like to have young kids — an unmade bed covered in multiple loads of clean laundry, a dusty table (because who really has time to dust side tables when you barely have time to take a shower or pee alone), a collection of dirty diapers that need to be taken out, and a spit up stain on her bed that she totally slept on (between catching some sleep and waking up to change the sheets, you bet I've made the same decision).

Usually, conversations about moms and cleanliness (note: this almost never happens to dads) revolve around two main ideas — either you think moms with messy houses are lazy and gross, or you think messiness is an inevitable part of parenthood (hence the popular saying, "Good moms have sticky floors, dirty ovens, and happy kids"). The reality though is that there are plenty of real, non-Instagram-celebrity moms who actually do seem to manage to have tidy houses and happy children, so really, the only thing that is accurate about any of this is that we're all different in the way we approach housekeeping and parenthood.

The part that really matters about these comments though is not whether judge-y social media users have a point. What really matters, it seems, is why we even think that continuing to place pressure and expectation on young moms is ever a good idea. After all, behind all these comments is the implication that somehow, the criticism is coming from some kind of well-intentioned concern for the child's well-being. He could get hurt! Can she really be caring for her babies if she can't be bothered to throw the used diapers in the trash or put away their laundry?!

If we really cared about her children's well-being though, it seems the best thing anyone could do for Duggar — or any mom, for that matter — is to step back and take notice of all the things she's doing right. She's letting her son play and have a fantastic time. She's allowing him to explore and learn and take small, calculated risks. She's giving him a chance to tire himself out so he'll get a good night's sleep. Even if she hadn't put down all the pillows and blankets (let's be honest, that slide isn't actually very high up), and even if there were toys on the floor or clothes on the couch, that all sounds like a fun evening filled with quality family time.

The truth is that being a mom can feel so, so hard. You wake up everyday and you try to do what's best for your kids — caring for them, loving them, trying to teach them things and keep them safe while hoping, at the end of it all, they'll turn into happy, well-adjusted people who got at least most of what they needed. For many of us, though, that also means that we put a huge amount of pressure on ourselves at all times, and it can feel incredibly overwhelming.

While those who feel entitled to criticize other mothers — either public figures on social media, or random women at the grocery store — might feel like they're justified in sharing their opinions, all they are really doing is confirming those women's worst fears about their own parenting abilities. Maybe it's time to at least let the tidy house judgement go, so that we can actually focus on loving our children the best that we can.