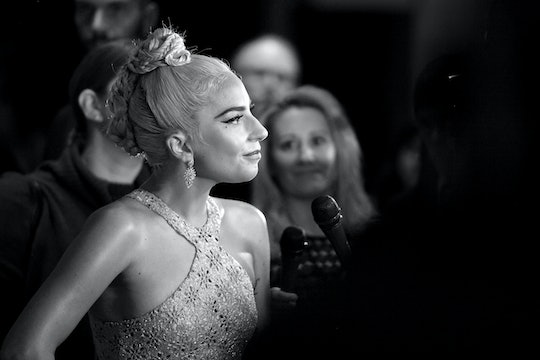 The unthinkable happened. It wasn't pigs flying or hell freezing over; it was worse. Lady Gaga lost for Best Actress In A Motion Picture for her role in A Star Is Born at the Golden Globes. The raw talent Gaga brought to the film quickly made her a favorite for not only a Golden Globe but every award on the table this season, so the loss came as a blow, and no one seems more upset than Gaga's fans, based on their reactions on Twitter anyway.

Quick recap: Lady Gaga starred in A Star is Born (2018) opposite Bradley Cooper, who also directed the film, which is a remake of a remake of a remake, as Vogue explained. Gaga played Ally Campana, an aspiring singer, who begins a love affair with rockstar Jackson Maine (Cooper) that also launches her career. It's a beautiful and heartbreaking romance, and fans and critics alike quickly fell in love with Cooper's take on the story, with everywhere from Rotten Tomatoes to The New York Times to Roger Ebert giving the film rave reviews, praising above all the talent Gaga brought to the project.

Despite speculation that the pop star didn't have the chops to be a serious actress in the months leading up to the film's release, Lady Gaga's powerhouse performance skyrocketed her to instant movie star status. Gaga's "disarming, naturalistic presence is crucial to the movie’s force" praised The Times, highlighting her stripped down look and the poignant vulnerability she brings to the role. Her film debut became an immediate hit with audiences everywhere, and after her nomination for Best Actress at the Golden Globe Awards came in, her sweep for all the best actress awards this season seemed inevitable. (She also got a nom for Best Original Song for the song "Shallow" from the movie, for which she won).

But Gaga's seemingly unstoppable rise to the top came crashing down when she didn't win for Best Actress In A Motion Picture, and her fans shared their disappointment and rage.

Glenn Close won for her performance in The Wife instead, and Gaga's "little monsters," as her fans are called, were outraged to say the least. Close herself even seemed shocked that she won over Gaga.

As you can see, the tweets started pouring in as soon as the news broke, and the little monsters seemed to be going through every step of the grief process in record time.

Of course, there was bargaining.

Finally, the fans reached sadness, as to be expected.

And at last, the little monsters found acceptance.

On the bright side as the tweet mentions, Gaga's Globes loss doesn't mean she won't win at the other awards ceremonies this season. She's already been nominated for a SAG award, as Variety reports, and the full list of Oscar nominees are set to be announced January 22, according to the Academy. So there's reason for the little monsters to have hope yet. But for now, it's okay to mourn.

Only time will tell what the rest of awards season 2019 will bring for the queen of pop.