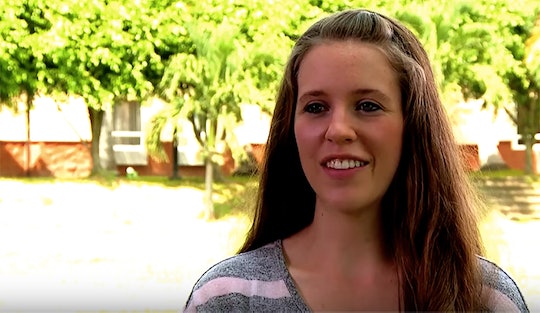 If you follow the Duggar family, then you probably already know about Michelle and Jim Bob Duggar's philosophy on "modest" clothing. Essentially, the family believes women who show off certain parts of their body are "defrauding" men. Defrauding is Duggar speak for women "stirring up desires" in men "that cannot be righteously fulfilled," according to TLC. As time has gone on, however, some of the Duggar women have distanced themselves from this rhetoric by adopting new styles of clothing. And the latest Duggar to experiment with her style is Jill Duggar, who is arguably one of Jim Bob and Michelle's most conservative kids. As for Duggar's recent experiment with fashion, she decided to don a bathing suit during an outing to the pool on Saturday. Unfortunately, many fans are freaking out about Jill Duggar wearing a bathing suit, and the criticism is a bit unwarranted. Duggar, regardless of her family's beliefs, deserves the chance to forge her own identity as an adult and parent.

Back in the days when Duggar and her husband, Derick Dillard, starred on Counting On, cameras followed them as they vacationed in Central America. The couple had decided to take a break from their missionary work, and they took their then infant son, Israel, to a hotel with a swimming pool. Once the episode aired, fans got to see Duggar and Dillard teaching Israel to swim, a sweet milestone many parents can relate to. Although the focal point of the episode should have been Israel, Duggar's choice of clothing for the outing stole the show. Instead of sporting a one piece swimsuit or bikini, Duggar wore a purple t-shirt and water shorts for the occasion. Needless to say, fans had a lot of thoughts about Duggar's pool gear.

"What the hell are they doing in that pool with their clothes on?" one fan commented on a clip from the episode, according to YouTube.

Another person said: "Oh my goodness! Why are those jerks in that pool with their clothes on?"

What's interesting is, people expressed a similar level of outrage and snark when Duggar wore a bathing suit to the pool on Saturday. Although it's not clear what type of suit this is (it could be a long dress), it appears Duggar is now comfortable with exposing her bare shoulders and arms to the world.

"Nothing says summer like a relaxing family day at the pool," Dillard captioned a shot of himself swimming with Duggar, Israel, and their 11-month-old son, Samuel, according to Instagram. "What do you enjoy doing with friends & family on summer days? #summer #pool #family #fun."

Once again, fans turned what should have been a sweet family moment into a discussion about Duggar's body.

"I can see your shoulders :/ not very modest of you," one fan commented.

"@derickdillard JILLS SHOULDERS ARE ON DISPLAY FOR EVERY MAN TO GAWK AT! I hope you were the one to okay the fashion choice," another person sarcastically penned.

Another person chimed in: "Shoulders are the devil."

"Shoulders :0 so not a duggar anymore," one commenter said.

Of course, Duggar can wear what she wants, even if it doesn't reflect her parents' ideals. Duggar is a grown woman, and she should be able to make her own decisions about clothes and whatever else she pleases. Sadly, I think Duggar gets a lot of unfair flak because of Dillard's beliefs, while others seem to attack her due to differences in politics. Although it's completely reasonable to disagree with Duggar's values and ideas, it's important to leave body shaming out of the equation. People can express their frustration (I'm frustrated by these two on the regular, so I get it) through evidence and logical arguments. There's no need to bring a person's looks into a disagreement.

The good news is there are many people out there who are on the same page about letting Duggar be.

"You are ridiculous. Who cares what she wants to wear in the pool," one person responded to a naysayer. "Focus on the fact that she's a great mother instead."

Another person added: "She actually looks like she's wearing a "normal" suit. They make suits that look like a tank top and shorts. But it's her choice, she could wear a snowsuit if she wants."

"She is married and it is up to her," a fan stated. "It's her body. As long as she feels good in what she wears."

It's true that the most important thing here is that Duggar "feels good in what she wears." It's hard enough for some parents to feel confident in swimwear, so why pick on a person for wearing what makes them feel secure? Not to mention, Duggar is probably in the process of establishing her own belief system as an adult, spouse, and parent. As Duggar navigates life outside of Jim Bob and Michelle's compound for the first time, it's probably best if people lend their support instead of criticism. The other option is to just say nothing at all. At the end of the day, Duggar deserves to make her own fashion choices in peace.