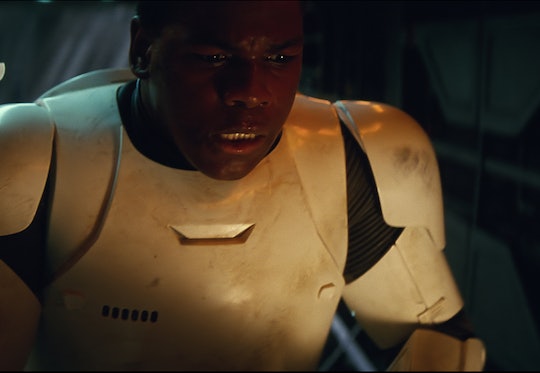 Fans Shipping This 'Force Awakens' Couple Really Want It To Happen, But It Probably Won't

Romantic subplots: you either love 'em or hate 'em. While they can be distracting, and sometimes even disastrous (looking at you, Mindy Project), some fans just can't help but perform a little fictional matchmaking. Just about 38 years ago, your parents walked out of Star Wars arguing over whether Leia should end up with Luke or Han (hey, they didn't know what we know now!). But times have changed, and The Force Awakens fans are shipping a couple you might not expect: Poe and Finn.

Warning: if you still haven't seen The Force Awakens, get off the Internet! Or at least get off of this article, because (of course) it contains SPOILERS. What were you thinking, clicking on it in the first place? Moving on ...

Poe and Finn form an unlikely alliance in Episode VII. Poe, an X-wing pilot for the Resistance, has been captured by the First Order. Stormtrooper Finn (or FN-2187, as he's called at that point) has recently decided to defect, but needs a ride. So he frees Poe, and the two take off in a stolen TIE fighter. Poe gives Finn a proper name, and the two eventually crash on Jakku. When Finn believes Poe to be dead, he takes on the pilot's cool leather jacket, as well as his mission to find BB-8, who holds the key to locating Luke Skywalker.

It's then that Finn runs into Rey, who lots of fans might think off as a much more logical love interest. After all, he does grab her hand a lot, and at one point, he asks her if she has a boyfriend. But that doesn't exactly equal true love. Finn lives in a universe where children are kidnapped and trained from infancy to become super soldiers, so it's not a stretch to imagine that the First Order isn't down with the LGBTQ community. And besides, it looks like Rey is going to become a Jedi, so she won't be able to have a relationship with anyone, anyway. Looks like that's a big no-go on Rey and Finn, you guys.

Need more evidence? When Finn and Poe are reunited at the Resistance base, they're ecstatic to see each other again. And Poe even lets Finn keep his jacket because it suits him, which is obviously code for, "You look super hot in that, plus it makes me feel like we're in high school and you're wearing my letterman jacket." And we know that Finn sweats Poe's flying skills.

Let's see what Twitter has to say about it:

Admit it, they're totally cute together. And it seems only fitting, after giving Finn a first name, that Poe eventually give him his last name, too. So will it ever actually happen? I have my doubts, but if these two crazy kids do end up together, I wouldn't mind one bit.