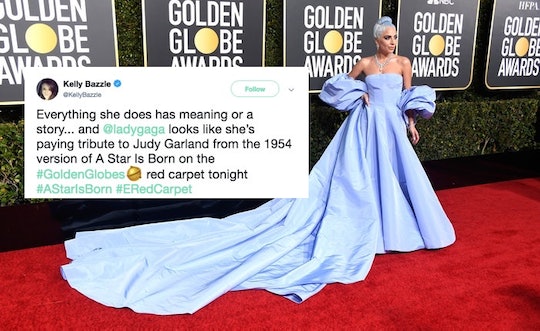 When Lady Gaga stepped onto the red carpet at the 2019 Golden Globes, she was serving pastel drama from head to toe in a voluminous periwinkle gown that matched her icy blue hair. It was a show-stopping look, but it may have been a meaningful one, too. That's because fans think Lady Gaga paid homage to Judy Garland in A Star Is Born on the Golden Globes red carpet.

Judy Garland played the female lead of 1954's A Star Is Born, though the character wasn't exactly like Gaga's Ally Maine in the 2018 version. Garland's star on the rise was an actress and singer named Esther Blodgett, while Ally was a genre-jumping musician. Fan @KellyBazzle was quick to point out on Twitter that Garland wears a gorgeous pale blue gown in the film with a ruched shrug and long gloves. It's not exactly like Gaga's dress, but they are similar enough that it could be a genuine homage. Not only is the color scheme of Gaga's gown reminiscent of Garland's, but the ample sleeves certainly call the shrug to mind.

While being interviewed by Ryan Seacrest on E! Live From the Red Carpet, Lady Gaga didn't expressly state that she had been inspired by Garland. But considering her penchant for pop culture references, it definitely seemed possible that she was trying to honor her predecessor.

Possible, but unfortunately not the case. While Lady Gaga didn't address the potential homage with Seacrest, she did clear things up while talking to Nancy O'Dell and Entertainment Tonight. She explained that she was wearing a Tiffany diamond necklace and Giuseppe Zanotti heels with her Valentino couture gown. And if the look was reminiscent of Garland's, then that was a total accident. But that didn't make it any less special; in fact, it seemed to imbue the night with even more significance for Gaga.

"We didn't say that. No, but it looks an awful lot like that, doesn't it?" Gaga said to O'Dell of her gown's resemblance to Garland's. "She looks beautiful. This is Valentino Couture custom creation for me. That's special, except I'm missing the gloves. Thank you for showing me that. It made my night."

It sounds like an already special look became all the more noteworthy to Gaga.

Even if Gaga didn't intentionally honor the woman who played the role before her, she certainly seemed pleased by the coincidence. And fans rolled with it on Twitter as well, with many delightedly making the comparison between the two. A few people pointed out that she looked quite a lot like the titular character in Disney's Cinderella, too. Whether you think Gaga looked like a princess or a movie star, she definitely made a big impact on the red carpet.

The nod to Garland might not have been on purpose, but if anything it makes it even clearer how suited Gaga was to her role. She's so in character that she's making allusions to past versions of A Star is Born without even meaning to! That's dedication to one's craft.