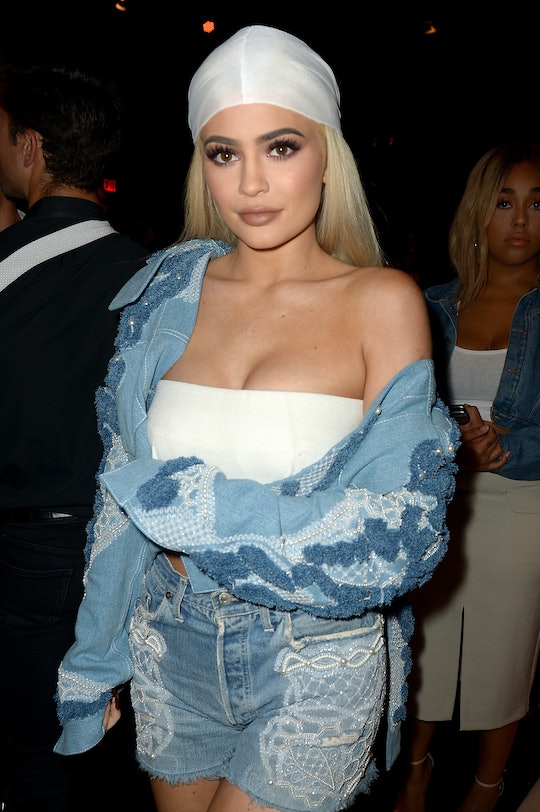 Listen, say what you will about the Kardashian-Jenner family, but the girls in that blood line really know how to keep people on edge and invested in the details of their daily lives. And while the 20-year-old beauty mogul has yet to confirm anything, fans have been heavily invested in one rumor surrounding the family right now. In fact, many fans think these "clues" from Kylie Jenner's Snapchat confirm she's pregnant. Of course, everything Jenner does nowadays is being intensely scrutinized by the press and fans alike, but there are a few snaps that she's shared that seem to be teasing everyone.

In September, news broke that Jenner was reportedly expecting her first child with boyfriend Travis Scott, according to People, although neither of them have actually confirmed anything. But of course, because it's Kylie Freaking Jenner and her family is practically one-fifth of the entire United States' news cycle, the headlines and reports of her pregnancy have been never ending.

Which kind of makes sense when you look at what Jenner has been posting to her various social media channels. On Instagram and Twitter, the reality star has been subtle, but she definitely could be mocking us all behind her phone screen with her witty captions. On Snapchat, though, it seems to be a totally different story.

Here are all the times Jenner's Snapchat has made fans think she's confirming her pregnancy, despite her never having actually said anything.

When She Started Using The Word "Baby"

In October, with the pregnancy news still relatively new, Jenner took to Snapchat to share a video of herself hanging out by the pool. But it wasn't the pool that had fans talking. Noticeably, Jenner didn't show any image of her torso in the video, a stark shift from the videos and pictures of her past.

Additionally, Jenner also referenced a song by Cigarettes After Sex, with the line, "nothing's gonna hurt you baby." And while she may have just been enjoying a nice afternoon by the pool, she could also have very well been teasing fans about her rumored pregnancy.

When She Preferred A Blue Phone Case

Listen, fans are so desperate for any kind of confirmation about Jenner's pregnancy that when she posted a photo of phone cases to her Snapchat, the entire internet went into a frenzy. And considering the fact that this Snapchat was posted was pretty soon after the initial pregnancy news, it's understandable that people were clamoring for Jenner's post to be some sort of news.

But, really, her photo of three phone cases for her website doesn't really prove anything. In the photo, Jenner is seen holding three phone cases: two pink and one blue in the middle. Her caption, "which one? I'm thinking blue," followed by a blue heart emoji has everyone thinking that not only was she confirming her reported pregnancy, but that she was also letting the world know that she was having a boy.

But Then, She Went All Pink Everything

Then, in November, Jenner posted a series of photos to promote her holiday surprises for her Kylie Cosmetics brand. And while her brand is known to be pretty pink-powered, her snaps for the event sparked a lot of rumors that she was expecting a baby girl.

Jenner really is the queen of teasing her fans. In another video she shared to her Snapchat in November, Jenner is seen driving her car, with a giant diamond ring on her left ring finger. Now, while this doesn't necessarily reference any sort of pregnancy news, fans did question if it meant that Jenner was engaged to Scott following the announcement of her alleged pregnancy.

Really, though, until the news is confirmed by Jenner herself, nothing can be known for sure, besides the fact that she will remain the queen of keeping people guessing.