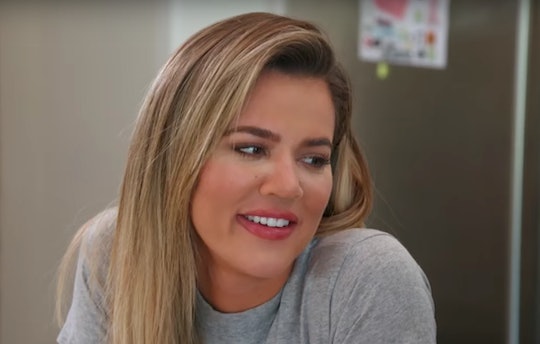 The Kardashians have built their brand on sharing their personal lives with the world. So it's no surprise that fans are going nuts with speculation over Khloé Kardashian's rumored pregnancy, and wondering when she'll confirm it already. Now, though, some people think that they have spotted a huge pregnancy clue hidden in Khloé Kardashian's Snapchat, thanks to some very reflective sunglasses showing what appears to be a full-body pillow in her home.

Kardashian posted the Snapchat on Sunday to offer a one-day discount on her "signature sunglasses" from DIFF Eyewear. And sure, the sunglasses look great on the reality star. But that's not what got fans talking. Turns out that if you look closely at the shades, as People reported, you can see the reflection of what looks like one of those full-body pillows that expectant moms use in order to help them get a good night's sleep despite their changing bodies making it tough to get comfortable.

Of course, it's totally possible that the mysterious, unidentified object is something else. But it certainly looks like Bluestone's Full Body Maternity Pillow with Contoured U-Shape, or some similar product. And that was enough to set off a whole new flurry of speculation among fans, who have been hungering for confirmation ever since rumors of Kardashian's pregnancy hit the internet back in September.

Romper has reached out to Kardashian regarding her reported pregnancy, but has not heard back. In fact, it seems that no one in the media has. Though a new story about it seems to hit the internet every day, Kardashian has been unusually tight-lipped about reports that she is expecting her first child with boyfriend Tristan Thompson.

And she's not the only member of the family who has been secretive about a rumored pregnancy. Kylie Jenner is also reportedly expecting her first child with her boyfriend, Travis Scott, but has also yet to confirm, leading fans to scour her social media for clues like they are Sherlock Freaking Holmes. In fact, one theory about the body pillow reflected in Kardashian's sunglasses, according to Cosmopolitan, is that it could actually belong to Jenner instead, who is reportedly getting very into shopping for baby products.

However, it looks like fans could be getting some confirmation soon. A "still to come this season" promo for Keeping Up With The Kardashians seems to hint heavily that viewers will get to see Kardashian announce her pregnancy to the rest of her family when the series returns in January. In the clip, a group of assembled friends and family all react in surprise to some big announcement (with a chorus of "What?", "Oh my God!", and "Are you kidding me?"), while the trailer shows Kardashian's mom Kris Jenner wiping away tears of joy, and various people hugging a glowing Kardashian.

The trailer was certainly enough to get fans talking on Twitter:

It would make sense for the big announcement causing everyone to freak out with joy to be Kardashian's rumored pregnancy. As one source told People:

This is something Khloé has wanted for years and years and yet it’s more than that: she didn’t want it unless she was in the right relationship for it... This is such a wonderful moment for her: not only is she going to be a mother, she is going to be raising a child with a man she truly loves. Everyone is over the moon for them both.

One way or another, fans will likely find out more information soon. After all, sources claim that Kardashian is due in February or March, according to INSIDER.

And in the meantime, fans will probably continue to look very closely at everything she posts on social media. Hey, you never know when a baby or pregnancy object might be reflected in various surfaces.