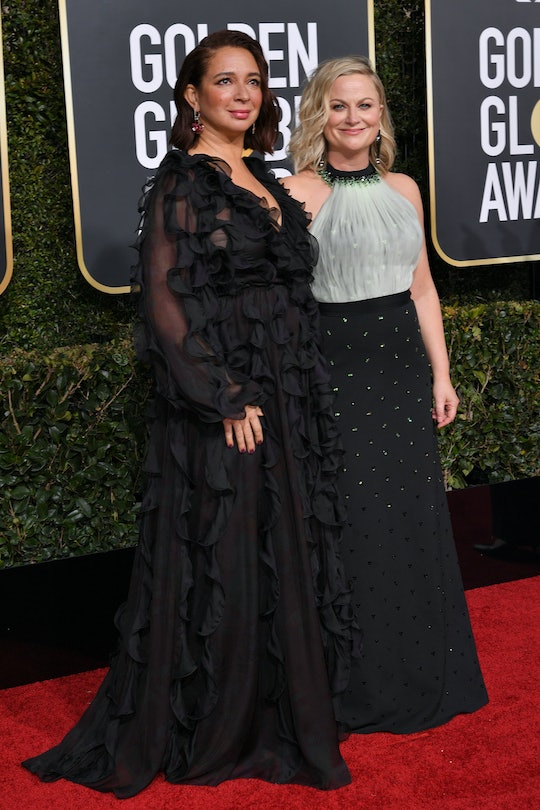 The search for Kevin Hart's Oscar's host replacement can finally be called off thanks to a hilarious presentation by Amy Poehler and Maya Rudolph at the Golden Globes. After the pair did a series of jokes and skits that had the audience in stitches while presenting for best supporting actor and best screenplay, fans decided Poehler and Rudolph should host the 2019 Academy Awards, and they started the campaign on Twitter.

In case you haven't been keeping up with the awards show drama of the year, the Oscars have been struggling to find a suitable host for the Oscars after Kevin Hart resigned from the gig when he was called out for series of homophobic tweets he had posted earlier in his career, as CNN explained. Hart apologized, and many have urged him to reconsider hosting despite the controversy, most notably Ellen DeGeneres. However, Deadline reported that Hart will not be taking the position back because he does not want to be a "distraction," and since the Academy Awards are set to air Feb. 24, the Academy has got to find a replacement soon.

So the most prestigious movie awards show is still hostless, and there has been much speculation about who could take up the post. But after their performance at the Globes, fans turned to Poehler and Rudolph as the answer to the Academy's problems.

Poehler and Rudolph are obviously familiar faces in comedy from their SNL days and the myriad of other comedies they've starred in throughout the years. Rudolph solidified her position as a comedic hero after she co-starred in Bridesmaids with Kristin Wiig, as Poehler did with her series Parks and Recreation and movies like Baby Mama and Sisters, both of which she starred in with Tina Fey. In fact, Poehler has a history with awards shows, as she hosted the Golden Globes with Fey for three years. Fun fact: the duo chose to end their tenure as hosts rather than the ceremony asking them to step down.

So fans knew to expect some hilarity when Rudolph and Poehler got together to present, but the pair outdid themselves. First, they killed it with some on point jokes about supporting actors, and then followed it up with a hilarious skit referencing the surprise proposal from the 2018 Emmy's. Both their jokes and the skit had the well-honed comedic timing of two SNL alums, and the ease with which Poehler and Rudolph took the stage had fans thinking they should extend their bit to take on the Oscars.

Presenting an award is probably the best prep you can get for a job like that. People were also excited about Poehler and Rudolph because they're two female comedians. Hollywood seemed to struggle to find female hosts in 2018, a glaring issue in light of the Time's Up movement, as Vox reported, so seeing two rockstar women comics become a standout part of the entire Golden Globes gave people feelings for sure.

Although Poehler and Rudolph definitely proved they've got the chops to host, there's no way to be sure they'll be selected to host. Other comedians or actors might be in the running, the duo might not accept if they're offered, and some think Hart will still take on the role despite the controversy surrounding his original appointment.

There's no way to predict what will happen, but at least we know Poehler and Rudolph have the people's vote.

I guess we'll just have to wait and see who the Oscars hosting bid goes to.