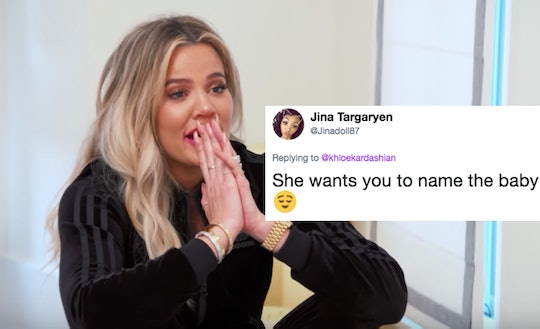 Khloé Kardashian is expected to give birth to her first child, a daughter, in the upcoming weeks and this could not be any more exciting. The countdown to her baby's arrival has started, which means that people are now desperately clamoring for more details about her pregnancy, including what she will name her daughter. These theories change daily. But now, as of Wednesday, it seems like fans want Kardashian to consider this baby name for her daughter and it comes with a very sweet and special meaning.

But maybe her pregnancy has been hard on her emotions because this past week, Kardashian has not been able to stop talking about her dog, Gabbana, who died in January, according to Bravo. On Monday, Kardashian Instagrammed a photo of her with the pooch with the caption "I miss you Goober" — and on Tuesday, Kardashian tweeted that she had dreamt about Gabbana for four nights in a row. "I wonder what she is trying to tell me," Kardashian wrote.

Well, some fans think that Gabbana could be trying to tell Kardashian to name her daughter in tribute to her — and it isn't the worst idea that fans have had.

Think about it — Gabbana exudes images of luxury, sophistication, and style (because of the brand, Dolce and Gabbana). Kardashian is a clothing designer for her own brand, Good American, and there is no doubt that her future daughter will be just as stylish as she is. So Gabbana could be the perfect name for her, although it might be strange for Kardashian to refer to her daughter by her dog's name, especially if she was so attached to the dog.

But fans on Twitter chimed in with affirmations that Kardashian should name her daughter Gabbana (or Dolce).

But on the other hand, maybe Gabbana is trying to tell Kardashian something else — name the baby something a bit more mainstream.

Throughout her pregnancy, Kardashian has stated that she really has no clue when it comes down to naming her child. Earlier this month, Kardashian tweeted that she hasn't settled on the right name for her child, according to People, because "it's so hard." Although she has a little bit of time left to figure it out, she could probably use a push in a certain direction — and naming her daughter Gabbana (or Gabby) could be that push from fans that she needs.

But the fact of the matter is, Kardashian's dreams about Gabbana could just be because she is still grieving her the loss of her dog. Research has shown that the loss of a dog can be akin to losing a human friend or family member, according to Psychology Today, and the grieving process does take time. January was only two months ago so it's understandable for Gabbana to still be so fresh in Kardashian's mind, even if Gabbana isn't physically with her.

Kardashian cared for Gabbana like she was her own daughter. Gabbana was the family dog belonging to the Kardashian-Jenner family, according to the Daily Mail. But when Kardashian's mom, Kris Jenner, and stepdad Caitlyn Jenner split up in 2016, Kardashian took Gabbana into her home and cared for her exclusively. When Gabbana died in January, Kardashian took to Instagram, according to People, where she wrote a touching post about how much Gabbana meant to her. "She was more than a pet," Kardashian wrote in the photo's caption. "She was my first child, companion, and my friend. She was incredible!"

Nothing and no one can replace the loss that Kardashian is still feeling from when Gabbana left this earth. But it's possible that Kardashian could pay tribute to her first "child" with the birth of her daughter in the upcoming weeks.