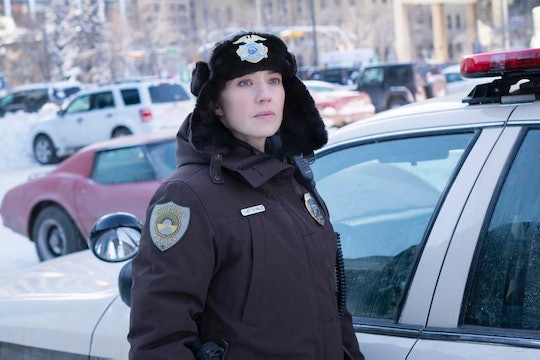 These 'Fargo' Season 3 Theories Will Make You Think

The FX popular anthologized miniseries Fargo returned for a third season on April 19, just as creator Noah Hawley's newest FX series Legion wrapped up its first season. Viewers noticed that the tone change between the two shows was abrupt and, as Entertainment Weekly put it, "Coming so soon after [Legion], the Fargo premiere is refreshingly simple and plays like an act of creative throat-clearing." So there seems to be a lot of excitement going into the show's third season. The premiere set up some intriguing potential sci-fi elements, so the Fargo Season 3 theories are already flying, especially considering how little the supernatural had to do with the source material.

In the premiere, viewers were introduced to the two characters in a contentious, murderous feud which mimics that between Jerry Lundegaard and Carl Showalter in the film. The twist? Ewan McGregor plays both characters. He portrays twin brothers Ray and Emmit Stussy, whose sibling rivalry quickly turns criminal. Emmit is a slick businessman, the "Parking Lot King of Minnesota," although his success reeks of shady business dealings. Ray is a lowly parole officer in a relationship with one of his parolees, Nikki, who can't scrape together enough money for an engagement ring.

When he enlists another of his parolees, Maurice, to steal a valuable stamp from Emmit, which Ray maintains used to belong to him and is still rightfully his, the parolee ends up at the wrong house by mistake. You guessed it: mayhem ensues.

Here are a few popular theories about where this season is headed, including possible explanations for that bizarre UFO subplot from last season.

Season 3 Is An Allegory For The Cold War

This impressively sophisticated take comes from Redditor Myrrun off the Fargo subreddit. Basically, they pose the theory that Ray and Emmit Stussy are an allegory for East and West Germany during the Cold War, citing the cold open prologue which took place in East Germany and one actor playing both roles (ie., one nation divided during the Cold War). They point out how the brothers are "set in their fates by a contract [their inheritance] defined in their infancy/youth that defines their existence."

Plus, Maurice wears a "Russia Is For Lovers" T-shirt, which, according to this Reddit theory, could be point to Nikki as a better-resourced, manipulative power with control over the economically disenfranchised East Germany (Ray). Meanwhile, Emmit is forced into partnership with V.M. Varga, an entity Emmit believed he was paying back a loan to, but who was really extorting him for control by insisting that the loan was "an investment." Writes Myrrun:

This is incredibly similar, in my mind, to the Marshall Plan, a strategy executed by the United States throughout the Cold War which would prop up states allied to the western powers such that they would not fall to the threat of communism.

In short, Nikki and Varga are the true powers this season, manipulating minor powers Emmit and Ray against each other for their own gain.

Season 3 Will Focus On Ghosts

Hear this one out. Another actively imaginative Redditor pointed out that each season of Fargo focuses on a tall tale. Season 1 is about acts of God and frames Billy Bob Thorton's character as a possible allegory for the devil. Season 2 has the UFO subplot, popular to late-1970s American pop culture, which is the time period in which Season 2 takes place. And Season 3, Redditor MrTrampy theorizes, will introduce ghosts:

[Ennis] was not very happy about his grandson [Nathan]'s father being gay. And from what we saw, [Gloria] has a split custody deal going on with her ex-husband...And [Nathan] obviously cared enough about his grandfather to insist on going back to get the wooden sculpture, so when he finds out that his grandpa probably died seeing that his grandson forgot his gift? Guilt. Probably [Nathan] is keeping that wooden carving with him forever now. And doesn't that just seem like the perfect set up for a ghost scenario? Grandpa tied to the wooden carving haunting sh*t? Like I could totally see a scene of ghost grandpa subtly haunting sh*t around the son. Tormenting his father because he is gay. Giving subtle clues to [Gloria] about his murder.

It's an out-there theory, but definitely has potential. And it certainly isn't any weirder than random UFOs in Season 2.

Technology Will Be A Villain In Season 3

Since Season 3 takes place in 2010, it's the first iteration of Fargo in modern social media culture. MoviePilot points to an interview executive producer Warren Littlefield gave in which he said: "Noah [Hawley] is enjoying how technology in many ways is supposed to unite, and perhaps that’s not what happens at all. Visually and aesthetically you’ll see Noah commenting [on that]."

Said Hawley on the influence of social media in Season 3:

I like the idea that we’re now living in a very selfie-oriented culture — people photograph what they’re eating and put it up for other people to see — it feels like a social dynamic that is very antithetical to the Lutheran pragmatism of the region. So much of our crime stories are based around the difficulty people have expressing themselves and communicating.

This theme seems clearest in Gloria's millennial son Nathan, who is very clearly addicted to his phone. It's likely he'll be the character in whom we see this idea play out.

It was confirmed last year that Hawley planned to bring back at least one character from Season 2 to tie the story together, much like he did between the first two seasons with Molly Solverson. But the more likely prospect is that someone from Season 1 will make a return appearance.

Ennis Is Somehow Connected To The Season 2 UFO

Eagle-eyed fans may have noticed that when Gloria walks into Ennis' house after he's been murdered, he was watching footage of the Season 2 UFO appearance (which, in the timeline of the show, would have been 30 years earlier). She also discovers that he's a secretly prolific sci-fi author with a Hugo Award. "Perhaps Ennis, somehow, created fiction based on truth (a neat link to the opening interrogation scene based in 1988 East Berlin)," MoviePilot speculates, "somehow tapping in to real-life supernatural events?" It would be a cool way to explain the truly out-of-left-field UFO subplot from last season.

The Season 3 premiere definitely set up a bunch of compelling possibilities, and given the nature of internet theorizing over television thrillers, it'll probably be way more fun to piece together clues than it will be to watch the show at all.