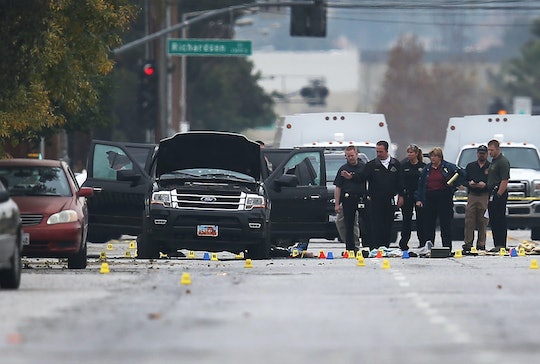 David Chesley, one of two lawyers for Syed Farook's family, spoke to CNN about the California shootings on Friday, saying, "There's a lot of things that, quite frankly, don't add up." He asserted that authorities' description of the attacks, where Farook and his wife Tashfeen Malik allegedly killed 14 people at a and wounded upwards of 21 more, simply don't make sense. "It just doesn't make sense for these two to be able to act like some kind of Bonnie and Clyde or something. It's ridiculous." While much can be said about Chesley's comments, he took the media to task on one very important issue, pointing out the double standard that exists in how we talk about mass shootings and religion. Chesley told reporters that just because Farook identified as Muslim does not make him a terrorist.

What we'd like to say on behalf of the families, and the Muslim community in general, is that just as late as 1 p.m. today, the FBI chief James Kolmey came out and said that there was no sign that the alleged shooters belonged to a larger organization or terrorist group. They've come up with some things where they're trying to say they were inspired by some groups, but there hasn't been any clear smoking gun evidence that they were part of any particular cell or any group.

His comments reaffirm what officials have already made clear: there's no clear motive yet on what could have caused two individuals to enter the Inland Regional Center to kill 14 and wound at least 21 others. Until there's a clear motive, everything (and anything is up in the air) — and until then, Farook's belief system should stay removed from the conversation. Chesley laid that point quite clearly, stating:

Until there is absolute clear evidence, every headline doesn’t have to say ‘Muslim massacre’ or ‘Muslim shooters,' because it’s going to cause intolerance and what we need is forgiveness.

The Washington Times claims that Farook's family hired a "Sandy Hook Truther" to defend their family and their late son, but regardless of what the media says about the attorney selected to represent the family, Chesley's comments ring true. In the time it takes police and federal officials to sort through a clear motive, our collective national energy would be better spent encouraging understanding, awareness, and advocacy of the differences between being a Muslim and being a radical, extremist, because the two are not mutually exclusive. Time and facts will reveal what the intentions of the suspected shooters were, not harsh media criticism launched unfairly at traditionally peaceful religion and the thousands of people who follow it.

When you look at the way suspected gunmen Robert Dear is treated, the media didn't immediately call the suspected Planned Parenthood gunmen a terrorist on the basis of his religion. Media instead portrayed Dear as a loner, a man who lived in the woods with no running water. Others dubbed Dear as "troubled." It's a departure from the language we use to describe victims of color: Trayvon Martin was called a "thug" by media. In stark contrast, just one day after the shooting at Inland Regional Center, the New York Post's cover read "Muslim Killers," and its lead editorial discussed the plans of the "killer Muslims."

There's no denying that talking about motive matters. What doesn't immediately matter is calling into question a suspect's religious affiliation.