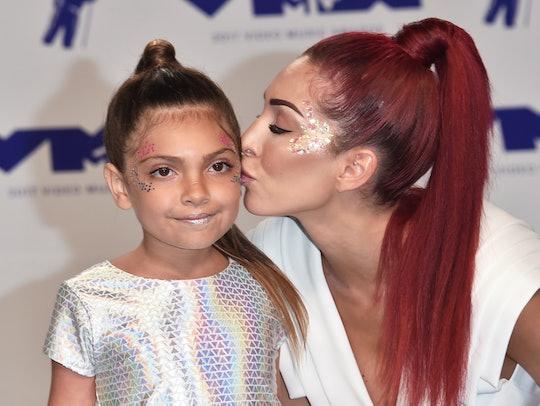 The world met Farrah Abraham back when she was cast on MTV’s 16 and Pregnant in 2009. Flash forward almost a decade, this former teen mom and now a 26-year-old single mother who has been through a lot. No one from the original cast of 16 and Pregnant and Teen Mom has gotten quite as much hate as her. Let's take a look at Farrah Abraham then and now.

Most recently, Abraham is getting a lot of hate for admitting to having naked photos of her daughter on her phone, according to In Touch Weekly. She was only defending Kim Kardashian after her daughter, North, took a topless photo of her and critics freaked out.

"My daughter and I, we run around the house naked and we just live life free," Abraham told TMZ. "I mean, we have naked pictures on our phones of each other because we’re like a mom and daughter crew."

This isn't the first time Abraham is in the spotlight for what some people have called questionable career moves, feuds with costars, plastic surgeries or parenting choices. It all started when she first debuted on MTV at the age of 17. She was just an average teenager — a cheerleader from Council Bluffs, Iowa, juggling school and a part-time job, according to Us Weekly. But then she got pregnant by her ex-boyfriend, Derek Underwood, who was 18 years old at the time.

Underwood, who Abraham had broken up with, wasn't even named at first. Her parents didn't want him to be part of her story, according to E!. He was tragically killed in a car accident less than two months before their daughter, Sophia, was born in February 2009.

"The last time I saw Derek was when I was five months pregnant," Farrah said on a 2016 episode of Teen Mom O.G., according to E!. "My dad and Derek pulled knives on each other and called the cops on each other and it was really sad."

In 2010, Abraham and three of her costars — Amber Portwood, Catelynn Lowell, and Maci Bookout — were invited to return for MTV's spin-off series, Teen Mom, on which they covered the struggles of being a young parent. And, for Abraham, that also meant being a single parent.

She also recounted her not-so-ideal relationship with her mother, Debra, who Abraham has called "mentally unstable," according to E!.

By 2012, the Teen Mom star was showing off her new rhinoplasty and chin implant, which cost her $16,000, according to Us Weekly. That was only the start to her plastic surgery journey. In 2013, she got new D-cups and debuted her adult film, Farrah Superstar: Backdoor Teen Mom.

Farrah Superstar: Backdoor Teen Mom released after Abraham decided to sell her sex tape, and she got $1 million for it from Vivid, which was less than her asking price of "a couple million," TV Guide reported.

"This is a risk for me to take, however I feel comfortable having given the rights to Vivid, a company I know can handle the media and press surrounding my sexuality," she said, according to TV Guide.

"I was drugged and raped more than once. I allowed the [wrong] type of people into my life," she said, according to TV Guide. "It was a very dark time.

Since, the reality TV star has appeared on Couples Therapy, Celebrity Big Brother in the U.K., Marriage Boot Camp, and her own MTV spin-off special Being Farrah, while continuing on as part of the Teen Mom OG family, despite tempestuous relationships with nearly everyone, according to E!.

And, most recently, she filed $5 million lawsuit claiming to have been fired for continuing to pursue adult entertainment opportunities, E! reported. She claimed to have left a meeting with producers and crew feeling "harassed, humiliated and discriminated against, disrespected, ridiculed and sex shamed," according to her court documents.

MTV parent Viacom told E! News in a statement: "We respect Farrah's decision to pursue other endeavors, and we wish her the best. Regarding her suit, the claims are without merit."

Whatever the case with Farrah Abraham, no other original cast member has gone through the same family or personal struggles as her, and no one has gotten quite as much criticism.

Maybe she'll pen her next chapter, too, about her post-MTV life.