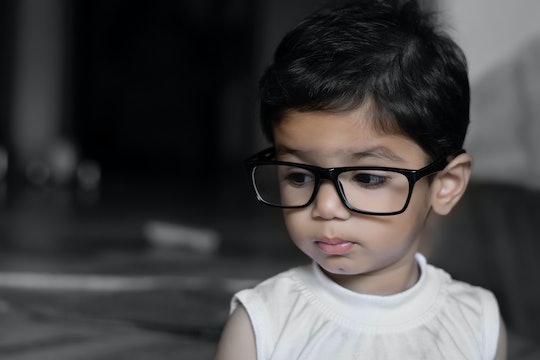 Having trouble seeing the whiteboard might impact your kid's learning — not just for that night's homework but even further down the road. A new study has found that farsighted kids have a harder time paying attention in school, even if their farsightedness is very slight. Seeing as this issue often goes undetected in young kids, it's important for parents to know what might be making class a little more grueling for their kids when compared to other, 20/20 students.

Published in this month's Optometry and Vision Science journal, the study compared visual attentiveness among 4- and 5-year-old kids by using a series of visual matching games. Of the children included in the research, 244 children were moderately farsighted and 248 children had normal vision, and all the kids' vision scores were assessed before the matching game began. Ultimately, according to the study, the researchers found that kids who were moderately farsighted had lower scores in the game, among other attention-measuring tests.

It's estimated that anywhere from 4 to 14 percent of preschoolers are affected by farsightedness, according to Business Standard, (also called hyperopia) and it often goes untreated. The widely circulated idea is that it's "normal," and the hope is that kids will just grow out of it as their eye muscles adjust to their impaired vision, ultimately compensating for their shortcomings.

When I was growing up and got my first pair of glasses (some super stylish black, rectangular frames from Mary Kate & Ashley for Walmart), my eye doctor also suggested that, as I grow, the same thing might happen to me and I'd "grow out" of it. A decade and a half later, and my prescription worsens at every check-up; suffice it to say, growing all the way to 5'10" did not fix my vision.

In previous research carried out by the same group, findings indicated that "children with uncorrected farsightedness lose ground on reading skills before they start first grade." Whereas this new research didn't link up exactly with their current findings, a takeaway from both sets of research is that inhibited learning early on creates bigger issues, and attention and reading skills are gravely impacted. Studies of this kind are key in order to provide children a fair opportunity at a well-rounded education.

Marjean Taylor Kulp, professor of optometry at The Ohio State University and the study's lead author, explained of the findings:

We knew from our previous work that preschool and kindergarten children with uncorrected farsightedness have decreased early literacy, and this new study shows that there are even more deficits in these children early on. It's important for us to identify these children and especially identify those who are having learning difficulties because of their vision.

So what should parents do if they suspect that their child has slight hyperopia? Whereas a child's vision might self-strengthen over time, “some doctors think it may be better to prescribe glasses because it could help improve vision or educational skills," Kulp explained in the study, aligning with the findings.

For many researchers, though, the solution is still unclear. "We need to begin to answer the question of how we should think about moderate farsightedness and what we should do about it,” study co-author Elise Ciner, a professor at the Pennsylvania College of Optometry, Salus University, said in the published findings.

Staying attuned to how a child's vision capabilities, literacy skills, and attentiveness interact will help clarify what the best course of action is. Honestly, it might all best be treated on a case-by-case scenario. While it might make sense for one wiggly, rambunctious kiddo to snag a pair of glasses that might keep him more engaged in school, another kid with OK focus and adequate reading skills might be better off without.