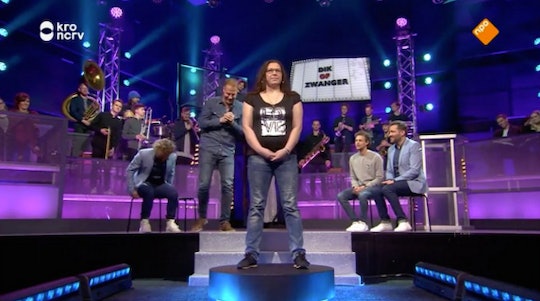 And you thought American TV had some problems with sexism. Turns out that a new Dutch celebrity game show, Neem Je Zwemspullen Mee, featured a segment recently where men had to decide if a woman was fat or pregnant. Yes, you read that right, and yes, unending screaming is an appropriate reaction to the "fat or pregnant" game show challenge.

According to BuzzFeed, Neem Je Zwemspullen Mee (or, in English, "Bring Your Bathing Suit") is a new show on a Dutch TV channel called NPO 3. Of course, for the first episode of any show, producers want to pull out all the stops. But apparently for this show, that meant featuring a segment where a woman walked out and stood on a platform in front of competing teams (made up entirely of men, of course). Then, for entertainment and funsies, they all got to stare at her body and try to answer the ultimate question — was she pregnant, or overweight? I assume that, if she turned out to be pregnant, the audience all stood up and touched her belly, and if she was deemed "fat," she was thrown into a pit of snakes until she agreed to maintain a size zero at all times so as to be more pleasing to the male eye. I cannot confirm this, however, because NPO 3 did not immediately respond to Romper's request for comment.

Oh boy. Where to begin? It's like someone sat down, asked themselves, "How can I combine fat-shaming and misogyny?" and then some other producer dude in the corner was like, "Hey, isn't it kind of weird that women can grow a baby inside their tummies? Maybe we can use that," and then the boss gave him a raise. (Again, I cannot confirm this, because NPO 3 has not yet responded to Romper's comment request.)

A segment like this promotes the idea that women's bodies are objects for men's entertainment and use, much like the spinning wheel on Wheel of Fortune. It also encourages fat shaming, which is mean, offensive, and — this is for anyone out there who claims to be fat-shaming someone for his or her own good — totally ineffective, if the goal is to encourage someone to lose weight. In a 2014 British study, researchers found that people who reported fat discrimination actually gained more weight than those who did not.

What makes the whole thing even weirder is that NPO 3, the network that aired the show, is a public broadcasting channel in The Netherlands, which means it's basically a PBS equivalent.

It seems that the general Dutch public was not too pleased with the segment either, and that reviewers panned the show. Hopefully that sends a message to content creators that "fun" challenges like that are actually not fun at all.