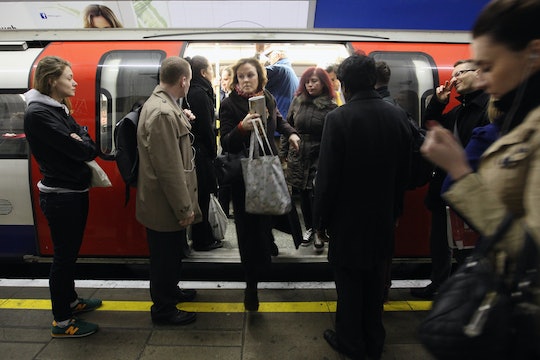 Fat-Shaming Cards Are Being Handed To Women In London, & They're Truly Horrible — PHOTO

Just in case you’ve read too many feel-good stories already today, and need a reminder that sometimes people can also really be the worst, here you go: Apparently there’s an "organization" in the UK that’s taken to handing out cards to people they think are too fat. On these cards, “Overweight Haters Ltd” claim to resent fat people for taking up too many resources, when half the world is starving. The card ends by saying, “You are a fat, ugly human.”

Wow. I think I can say, on behalf of the majority of pretty much all people everywhere, that the people doing this are giant a**holes for about a million reasons. First of all, newsflash: Handing out a card to a stranger, accusing them of being fat and ugly, helps no one. At best, the response will likely be a heartily raised middle finger, and at worst... well, I actually don’t want to imagine the worst case scenario of what receiving a card like this might do to someone who is possibly already enduring a heap of body image issues.

Also, if this “organization” was truly concerned about food resources, this isn’t exactly a proactive approach, is it? Donate to UNICEF if you want to ensure more starving people are being fed properly. Asking people to eat less is hardly going to translate directly to such a large issue as feeding people in places where resources are lacking.

ALSO, not only are these people monsters, but they’re monsters who can’t spell. Last time I checked the dictionary, the word “beatiful” didn’t exist.

That's the back of the card. Here's the front:

Hard to know whether this was something that just one person was behind (some people have suggested that it was some kind of modern art social experiment, but I'm calling bullsh*t), or whether there really is an organization by this name (quick Google search says NOPE), but more than one person has received a card like this recently.

But guess what? Good old Twitter took this on in the best possible way, by tearing these idiots down with some witty one-liners like these:

So British. So funny. Love all of it.

And then there were the people out there intent on helping to build confidence back up.

That is amazing! And even more amazing, was the next thing this company did:

Well, I think that pretty much puts an end to the conversation. L8r, h8rs.