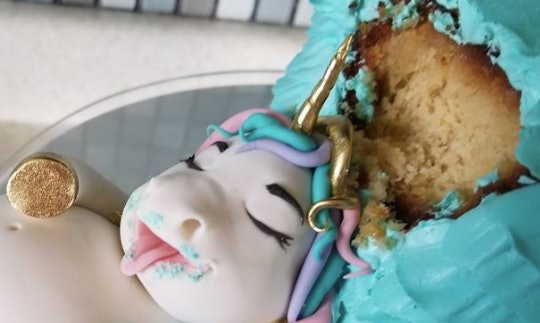 Adorable cakes have been around forever, but a new baking trend involving portly unicorns might be the cutest thing yet. Yep, fat unicorn cakes are gaining popularity, and it looks like everyone is here for it. The blissed-out, feasting fantasy creatures are something we can all relate to.

If you search almost anything for fat unicorn cakes, then this image of a blue cake from Choco Frutas by Lissy is bound to appear. It looks like a unicorn decided to feast on the cake, lost steam midway through, and collapsed into a happy food coma. Crumbs are scattered everywhere, frosting circles its mouth, and it wears an expression of complete contentment.

Choco Frutas by Lissy, a bakery in Puerto Rico, created this adorable — and honestly, really impressive — treat. It looks like people all over the world relate to the little unicorn's moment of complete contentment. After all, Unicorns are usually portrayed as magical, elegant, ethereal creatures. There's something great about seeing one totally pigging out on sweets. I'm far from alone in this sentiment, because loads of people relate to this little dude on a deep and spiritual level. Maybe the fat unicorn can be the official mascot of 2018?

But the Choco Frutas by Lissy cake is far from the only food coma confection out there. Several fat unicorn cakes have cropped up on Instagram in similar poses. It looks like these dudes are officially a thing.

So how did this trend get started? It appears that the original unicorn cake (that we know of) is from baker Theresa Täubrich of Crazy Sweets in Passedorf, Germany. In January, she posted a hilarious photo of her daughter's fat unicorn birthday cake, and the internet promptly lost its mind.

"I started the fat unicorn trend," Täubrich tells Romper. "When I published this cake on my FB Fan Page, it was shared with all pictures more than 1000 times." Täubrich reveals she designed the cake with chocolate and lots of chocolate whipped cream.

If you can't get enough of the unicorn confectionary trend (and who can?), then here are some other magical, delicious designs from other bakers. If you're looking for birthday cake inspiration for absolutely anyone, look no further. Something about unicorns is endlessly fascinating, whether they're being all majestical or just enjoying some sweet snacks.

More Like This
Score Big On Super Bowl Sunday With The Best Frozen Apps From Trader Joe's
41 Costco Appetizers To Level Up Your Super Bowl Party
10 Delicious Dips For Game Day & Also, Life
Are We All Stressed About Grocery Prices Right Now Or Is It Just Me?
What Parents Are Talking About — Delivered Straight To Your Inbox