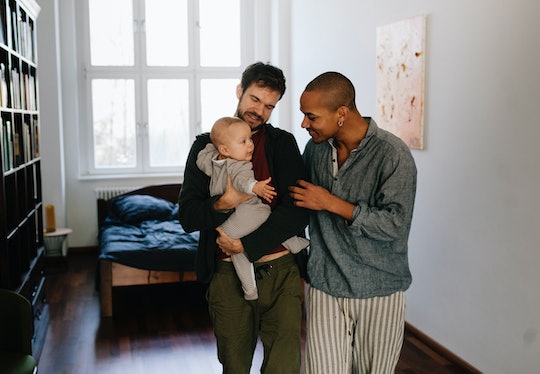 When you think about oxytocin, the picture that comes to mind is likely a mother snuggling with a baby. It might surprise you, then, to hear that in a study of around 800 families, researchers found oxytocin levels in new mothers and new fathers were identical. This was true in immediate and longitudinal findings. "To find that fathers are just as biologically prepared to care for infants was shocking," says Dr. Ruth Feldman, director of the Center for Developmental Social Neuroscience in Herzliya, Israel.

"Oxytocin is considered a 'maternal' hormone," Feldman tells Romper in an emailed conversation. "In fact, for over a 100 years, since its discovery, the thought was that it has two functions, stimulating uterine contraction and triggering milk let-down." The assumption going into the experiment, which was filmed as a part of the Netflix docuseries Babies, was therefore that nursing mothers would have a higher baseline.

The more a father interacted with his child, Feldman and her team found, the higher his levels of oxytocin. "Indeed, oxytocin has a very unique 'feed forward' mechanism," Feldman says. "The more parenting behavior, touch, and contact, the more it is produced." The combination of that oxytocin and also dopamine underpins bonding. Active caregiving, it seems, is in some ways a biological equalizer. But there was an area of the brain, Feldman discovered, that seemed mostly immune to the egalitarian effects of this hormone: the amygdala.

Mother or father, research indicates that we maintain biochemical bonds to our children into adolescence and quite possibly beyond.

Have you ever noticed that when a baby wakes up at night, mom is far more likely to hear it and respond than dad? This isn't a coincidence, and we can't blame it exclusively on societally dictated gender roles, either: We can blame it on the amygdala, an ancient part of the brain that, among other things, makes us more alert and anxious. While dads' amygdalas are affected by parenthood, Feldman saw only about 25% of the activation she was seeing in new moms. (Personally, this checks out: My husband snored through 75% of my amygdala activation after our kids were born.)

But even here, there are exceptions.

As Feldman notes in the documentary, "not every family has a mother." So she studied gay men who had children via surrogacy, and in those couples, the primary caregiver of the child showed similar activation of the amygdala as women who had given birth. "The father's brain switches on to protect infant from harm," Feldman explains. That is, a "similar brain activation [happens] via a different pathway without pregnancy."

And it's not just the amygdala and oxytocin levels that change with dedicated care-giving. Feldman describes an entire neurological network, called the "affiliative brain," driven by attachment.

It doesn't stop in infancy, either. "We believe close attachment bonds keep the oxytocin system active," Feldman says. Turns out, mother or father, research indicates that we maintain biochemical bonds to our children into adolescence and quite possibly beyond.

So the idea that fatherhood is as much a series of biological processes as motherhood is something that Feldman's research absolutely backs up and hopefully can be encouraging to dads and those who would seek to promote father-child bonding via family leave policies and laws.

Feldman hopes to see policies on paternity leave change. "Fathering is so much dependent ... in the biological sense ... on active caregiving," she says, so "not having time with their infant may truly harm the development of the father-infant bond during this very plastic period of the first postpartum weeks."

But bonding is something new dads can always work on building with their child. "The more you do it," Feldman says, "the more your brain would tune to it, the more you will synchronize with your baby, and the more fathering would be rewarding to you. There is nothing more rewarding than a deep bond with your child."