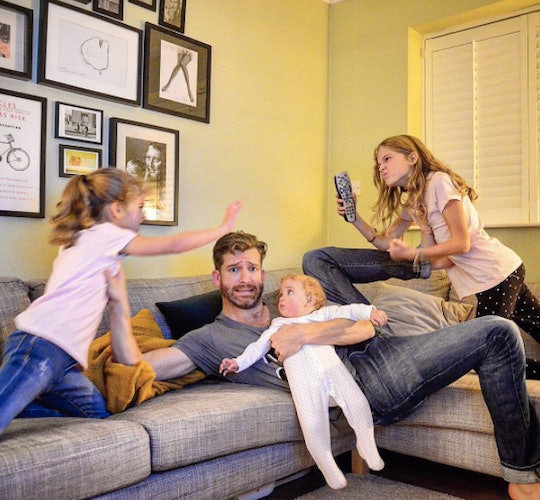 They say a picture's worth a thousand words, and one father's pictures say it all. British dad Simon Hooper documents life with his wife and four daughters on his Father of Daughters Instagram page, where he's always willing to talk candidly with followers about the highs, lows, and wild situations that come from raising a brood of four. (Specifically, four rambunctious girls.)

Hooper, an operations director for a management consultancy firm, now has over 255,000 followers on Instagram — but he started sharing photos simply to give people an honest look at the realities of parenting. "There is way too much sugarcoating when it comes to parents, so I wanted to share what it’s really like and provide a bit of humor at the same time," Hooper told the Huffington Post on Friday. "Everyone is dealing with the same issues in this journey called parenting."

Hooper and his wife Clementine are parents to a "girl gang" comprised of a 9-year-old, a 6-year-old, and two 10-month-old twins. From having twins cling to his ankles all day to discussing the reproductive system with his eldest daughter, Hooper keeps it real on his Instagram page. "In general my whole account is to show a realistic view of what parenting is like from a parent’s perspective," he told the Huffington Post. That realistic view, at least from Hooper's perspective, includes a few stories about poo and a whole bunch of baby smiles.

Here are a few of his most relatable shots.

"This morning, after feeding the twins, I could feel something in the bed down by my feet," Hooper wrote in November. "I searched around and found the offending item — What is that? A malteaser? An old grape? After an initial taste test (why on earth did I do that first) and further examination, we unanimously agreed it was a small hard poo. ... It was from when I changed the twins in our bed when I didn't want to walk to the changing mat — but that was 2 days ago. Lesson learnt. Also don't put things in your mouth if you don't know what they are."

"This week my eldest has been doing sex education at school. She's very mature about it & having a midwife as a mum, they know a lot more than your average kid," Hooper captioned this shot. He continued:

That said, she's chosen tonight (when @mother_of_daughters is away) to ask questions about men which makes me feel like an embarrassed child, but i promised to tell her the truth. My personal favourites: "Do you wear a condom daddy?" Me — "Yes". "Then why do you have so many children?" Touché.

On the twins' favorite toys:

We offer up the hand made, ethically sourced, non toxic, bespoke blocks made from organic, carbon offset wood, lovingly sourced from Norway. They look down their nose at them with disgust, decide they're tosh and toss them to one side. Then they go on a rampage to find keys, my wallet, my phone, anything that resembles a remote control and plastic packaging.

Ah, isn't it great how much we spend on buying our children only the best?

Sometimes we can get so caught up in the day-to-day chores involved in parenting that we forget to spend some one-on-one time with our kids.

"Most evenings when I'm home on time Anya and I play a game ... and then talk about how the day went. It's a kind of therapy session named 'Daddy download' (her choice, not mine) where I play the unpaid shrink who listens," Hooper captioned this shot of Anya and himself. "I get to know my eldest more in that 15 minutes than I do any other time. ... It's our time and I value it hugely. Dads, do something similar if you don't already or you may find they grow up and you don't know what makes your child the person they are."

"Developed a New product this evening — child shoes," Hooper explained. "They cost a fortune, stop you from achieving anything, age you dramatically, are never clean despite washing them regularly, and never go in the direction you ask them to. "

Hooper has tons of great photos of life with his daughters, but he's also got some solid advice for parents. From letting them know that "Eating kids' leftovers is still a source of nutrition," to reminding them to take an interest in their kids' interests ("Listening to Taylor Swift will not kill you," he promised), Hooper's Instagram profile is a great reminder that parents are human and we're all doing our best. If you're having the kind of parenting day where you want to laugh and cry all at once, Hooper's pictures will remind you that you're not alone.