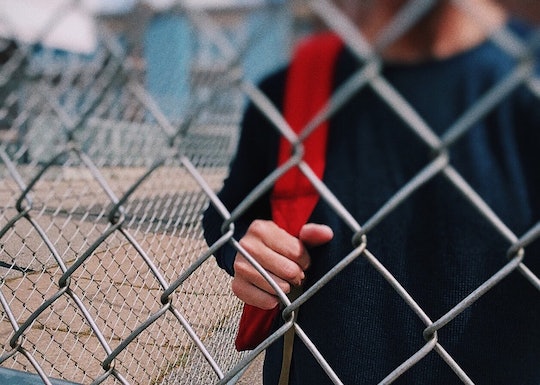 An already distressing situation took a shocking turn after a 15-year-old high school student was arrested for allegedly sexually assaulting a teenage girl after a playoff football game and his father reportedly said "young, fast girls" were to blame for the incident. As reported by the East Bay Times, the accused junior varsity football player’s father reportedly insisted the incident was consensual because his son — a student a De La Salle High School in Concord, California — is "tall, dark and handsome" and girls "go after it." Romper reached out to school officials for comment on the incident and its involvement in the investigation and is awaiting a response. According to ABC News, De La Salle High School's administration said in a brief statement that it is cooperating with police.

The 15-year-old girl — a student at Carondelet High School, a neighboring campus — and her father, as well as the alleged suspect’s father have provided starkly different versions of the incident.

The football player’s 38-year-old father — himself a registered sex offender because he was convicted of molesting a child under 14 years old, according to The East Bay Times — told the San Francisco newspaper that "they were just two teenagers having sex; they were just doing it at the wrong place, at the wrong time."

"He’s tall, dark and handsome, he plays for De La Salle, there’s a lot of girls that want to be with my son," the boy's father said in the same interview with Bay Area News Group, claiming the alleged victim gave his son consent. "When young, fast girls see something they like, they go after it."

The teenage girl recalled something much different in an interview with KPIX5, saying, "Boys need to know that no means no, period. Point blank."

"I was there, and I know what actually happened," she said in the same interview, adding that she had chosen to speak up because "it’s not OK for this to happen to anyone and it’s not OK for people, like society, to feel like the person that’s been hurt, that they’ve done something wrong to feel ashamed about the situation."

With the investigation still underway, neither account can be ultimately confirmed or debunked. But the commentary the boy's father gave suggests that an attractive football player, like his son, is incapable of sexually assaulting someone because any alleged victim probably "wanted" it. That type of mentality, especially from a parent's perspective, is a scary notion and possibly explains why only 30 percent of sexual assault cases are reported to authorities.