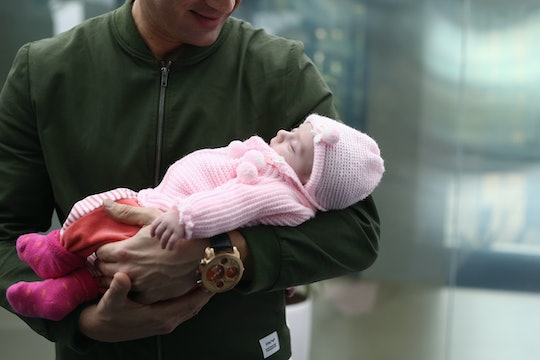 Study: A Father's Stress May Have A Surprising Impact On Their Children's Brain Development

It has long been understood that a mother's choices and environment during pregnancy, such as diet and vitamin intact, have an impact on the health and development of her baby. However, more recent research is revealing that a father's well-being also play an important role in their children's development as well. For example, as a recent study has found, a father's stress may have a surprising impact on his future children's brain development.

Researchers at the University of Maryland School of Medicine, led by neuroscientist Tracy Bale, found that a father's stress level could affect the brain development of his offspring. The study found that changes occur prior to conception, as the stress changes the makeup of the father's sperm, according to The Sunday Times. Bale and her team found that even mild changes can greatly impact the development and potentially the health of future offspring. The changes involve the sperm's microRNA, a genetic material that helps determine which genes become functional proteins. These proteins then impact brain development and could make the children more vulnerable to stress and conditions like PTSD, according to the Daily Mail.

The study's findings suggest that "even mild environmental challenges can have a significant impact on the development and potentially the health of future offspring," Science Daily reported. By determining the links between paternal stress and risks to his offspring, parents and researchers alike can do more to understand, detect, and reduce these risks.

This isn't the first study to suggest that men's health and lifestyle choices impact their offspring. Joanna Kitlinska, PhD, an assistant professor of biochemistry and molecular and cellular biology at Georgetown University, examined dozens of studies on paternal and child health. She found that "paternal age, lifestyle, and certain exposures can have an impact on children." Kitlinska said that diet, drinking, and smoking may contribute to birth defects, autism, obesity, mental illnesses, and other problems, according to WebMD.

Kitlinska's study review, too, found fathers' stress to be a contributing factor to the health of their offspring. Fathers with high stress levels may produce children with behavioral problems and stress appeared to alter certain genes that were passed on to offspring in animal trials.

Another factor greatly impacts offspring is paternal obesity. Kitlinska found that obese men are more likely to have children at risk for obesity. Additionally, these children are at a higher risk for diabetes, abnormal metabolism, and certain cancers. It is believed that obesity and poor nutrition cause changes in parents' genes linked to these conditions.

Sperm are not the only aspect of male reproduction that influences child health, though. A recent study conducted by the Robinson Institute at the University of Adelaide found that a male seminal fluid, as well as its interaction with the female reproductive tract can have a significant effect on a child’s health. Lead researcher and Director of the Robinson Institute, Professor Sarah Robertson stated in a press release that it is not only the sperm that carried this crucial information:

We've discovered that it’s not just the sperm, but the entire composition of the seminal fluid which has an important role to play in establishing the offspring's future health, and this is most notably seen in male offspring.

All of this semen talk can be overwhelming, but the specific gene alterations are not the key takeaway of these studies. Rather, research such as this provides valuable insight into the role that fathers play in the health and development of their offspring before they become parents. Rather than placing the full responsibility of maintaining an active and healthy lifestyle on mothers, informed families can work together to limit stress and make good choices for the betterment of their children. Knowledge is power — especially when dealing with the many remaining unknowns of reproduction. Hopefully additional studies, like this one, will continue to shed light on how fathers can positively impact their children's future well-being.