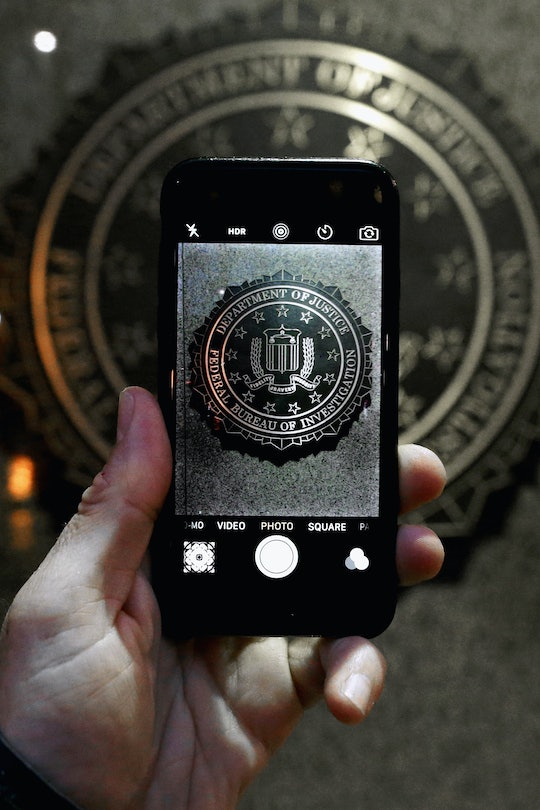 In a huge turn of events, it looks like an outside source will be able to step in so that the FBI doesn't need Apple's help to unlock the San Bernardino shooter's phone anymore — and it's just in the nick of time, as the tech giant and the U.S. government were headed to court on Tuesday to figure out whether Apple would be forced to provide a way in or not. Whether or not Apple should have to help the United States open Syed Rizwan Farook's phone has been a contentious issue ever since the government first inquired back in February.

As most know, Apple vehemently opposed the FBI's request, saying that to open up one phone would be to put all other iPhones at risk of being unlocked — and that wasn't something the company was sure it felt comfortable with, as security becomes a bigger and bigger issue for most consumers.

But it looks like Apple might have gotten out of having to choose between submitting to a legal precedent or holding firm on its beliefs about encrypted phones and security. According to The New York Times, documents were filed on Monday afternoon that suggest an outside company would be willing to get into the phone, though it's not guaranteed that all of the information would remain safe for investigation after the hack. The Justice Department wrote in its filing that, "testing is required to determine whether it is a viable method that will not compromise data on Farook’s iPhone," and added that if "the method is viable, it should eliminate the need for the assistance from Apple.”

The thing is, the FBI could run into the same problem with this outside source that led them to contact Apple for help in the first place. Much like you can lock yourself out of your Seamless account by entering the wrong password too many times, the FBI accidentally locked themselves out of Farook's phone initially, leading them to contact Apple to write a program to get around those security measures in the first place. But it might be worth a shot — the Justice Department also said that it would file a status report by April 5 to show how the hack was going with the third party, so it looks like the public will know more by that point.

This last minute news means good things for Apple and those who support governments having as little access to our personal data as possible. But it does delay answering that question in the long run.

If anything, this outside source has bought big tech companies, like Google and Microsoft (which has backed Apple in its fight), and the Justice Department a little time in figuring out where that balance of power lies. If the third party can help the government in a bind this time, that might be a quick solution. Some serious discussions about how to approach assisting law enforcement in using alleged criminals' phones and computers are now on the table.