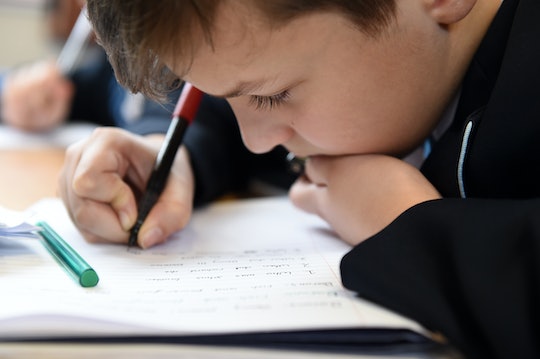 The demands of school and everyday life can be frustrating for kids with childhood ADHD, but there is now new hope for effective treatment on the horizon. On April 19, the U.S. Food and Drug Administration (FDA) approved the first device to treat ADHD in children, with a seemingly safe and easy-to-use system that could offer welcome relief.

The device is called the Monarch external Trigeminal Nerve Stimulation System, or eTNS, and is sold by device manufacturer NeuroSigma, according to CNN. An FDA announcement described it as a cell-phone size device that connects to a patch placed just above the user’s eyebrows. The device "generates a low-level electrical pulse…to the branches of the trigeminal nerve, which sends therapeutic signals to parts of the brain thought to be involved in ADHD."

The system is intended for children ages 7 to 12 years old who are not taking medication for their condition, according to USA Today, and the eTNS "should be used in the home under the supervision of a caregiver during periods of sleep," according to the FDA.

Richard Gallagher, PhD, who's an Associate Professor of Child and Adolescent Psychiatry at New York University, said in a statement to Romper that the "announcement of approval for a new form of treatment for childhood ADHD is exciting."

Gallagher continued, "Children afflicted with this condition and their families face many challenges at home, at school, and in social situations. Any addition to the toolbox of effective treatments (including medication, specialized behavior therapies such as behavior management training and organizational skills training) is welcome."

Carlos Peña, Ph.D., director of the Division of Neurological and Physical Medicine Devices in the FDA’s Center for Devices and Radiological Health said in the FDA's press announcement that "this new device offers a safe, non-drug option for treatment of ADHD in pediatric patients through the use of mild nerve stimulation," calling it "a first of its kind."

The eTNS system was developed by researchers at UCLA who were studying vagus nerve stimulation for the treatment of epilepsy, according to Monarch; external nerve stimulation has been in use for more than a decade to treat epilepsy.

As the FDA explained in its press announcement regarding its approval of the device, the initial study proving eTNS' effectiveness was performed on 62 children with moderate to severe ADHD. After four weeks of use, scores on the ADHD-RS scale — used to measure the severity and frequency of ADHD symptoms, which include difficulty staying focused and paying attention, the FDA states — dropped from 34.1 to 23.4 points, according to USA Today.

Gallagher cautions, however, that more research needs to be done before the treatment is adopted as routine. "That targeted brain stimulation shows enough promise to be approved by the FDA indicates that this first study is sound," he said. "Further research with more subjects and replication tests do, however, need to be conducted to assure that this treatment can be included in the standard of care."

This device should not be used in children under 7 and for children with an implantable pacemaker or active implantable neurostimulators, according to the FDA. Patients with insulin pumps also shouldn’t use eTNS and it also shouldn’t be used around cell phones because low levels of electromagnetic energy could interrupt the device. Side effects could include fatigue or sleepiness, teeth clenching, headache and increased appetite, the FDA advises.

For now, the system is only available with a prescription and is not currently covered by insurance, according to ScienceTimes, and initial costs run about $1,000.

If your child struggles with ADHD — roughly 5 percent of children have ADHD, according to the CDC — it doesn't hurt to talk with your pediatrician to see if eTNS might be a useful therapy. And hopefully, as more research is done, insurance companies will catch up with the need and demand for such treatment soon.

More Like This
Doctors Swallowed LEGOS To Prove Everything Is Awesome For Kids Who Do The Same
Does The FDA's Plan To Limit Lead In Baby Food Go Far Enough?
Why Is My Discharge Brown? Experts Explain
Covid Vaccine “Deserts” For Kids Under 5 Make It Almost Impossible For Parents To Find Shots
What Parents Are Talking About — Delivered Straight To Your Inbox