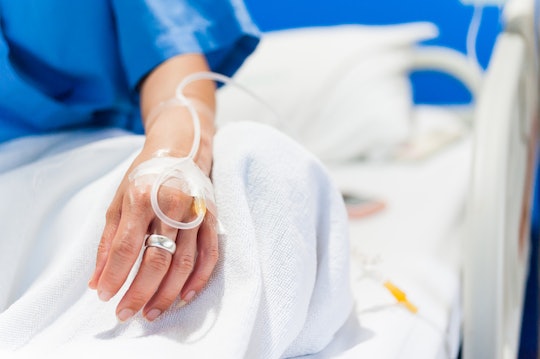 FDA Approves First Drug For Postpartum Depression, But There Are Some Major Catches

For the first time in history, the U.S. Food and Drug Administration (FDA) has approved a postpartum depression drug, according to CNN, proven to successfully treat the symptoms of the mood disorder that countless women experience. The news, which was first announced on Tuesday evening, is certainly encouraging to hear, but there are some caveats to be aware of, such as the drug's steep price tag and the arduous treatment process.

On March 19, the FDA announced that it approved the drug brexanolone, marketed as Zulresso, which will be available through a program called the Zulresso REMS Program. The program would require the drug — which is given through an injection for intravenous (IV) use — to be administered by a health care provider in a certified health care facility, as CNN reported. REMS also requires that patients be enrolled in the program prior to the administration of the drug, according to the FDA.

Additionally, the treatment consists of a continuous IV drip that lasts 60 hours — or 2.5 days — and requires careful monitoring in case of sudden loss of consciousness due to excessive sedation, according to the FDA. Side effects of the drug also include headache, dizziness, dry mouth, flushing, and excessive sleepiness.

Clinical trials conducted on over 200 women between 2016 and 2017 show the drug treating symptoms of postpartum depression within as little as 24 hours of its injection, according to Zulresso’s manufacturer, Sage Therapeutics. The drug maintained its effect through the 30-day follow up period, the manufacturer stated in a press release.

"Postpartum depression is a serious condition that, when severe, can be life-threatening. Women may experience thoughts about harming themselves or harming their child. Postpartum depression can also interfere with the maternal-infant bond," Tiffany Farchione, the acting director of the Division of Psychiatry Products in the FDA’s Center for Drug Evaluation and Research, said in a statement.

However, this treatment option will most likely be accessible to a select, privileged number of women. Not only does the drug require 60 hours of time to be administered, but it will also be priced around $20,000 to $35,000 per treatment, according to Biopharma Dive and The New York Times. In the United States, the initial list price for the drug is $7,450 per vial, totaling at $34,000 for an average course of therapy (the number of vials used varies according to patient), as CNN reported.

The drug will be available in late June, according to Sage Therapeutics. The company’s CEO Jeff Jonas said in a press release that he hopes the drug serves as a catalyst, sparking dialogue around PPD awareness and treatment. "We are proud to be a part of this important moment in mental health, creating the opportunity for an unprecedented change in the way postpartum depression is thought about and treated moving forward," Jonas said.

Moving forward, there are likely going to many questions about Zulresso and how to make it more accessible, but thing is for certain: this breakthrough drug could be a game-changer when it comes to supporting the mental health of mothers.

More Like This
Why Does My Baby Cough While Breastfeeding? Experts Explain
6 Mindfulness Activities For Kids
Does Pumped Breast Milk Have Antibodies? Experts Weigh In
In Search Of New York City's Most Luxurious Birth Experience