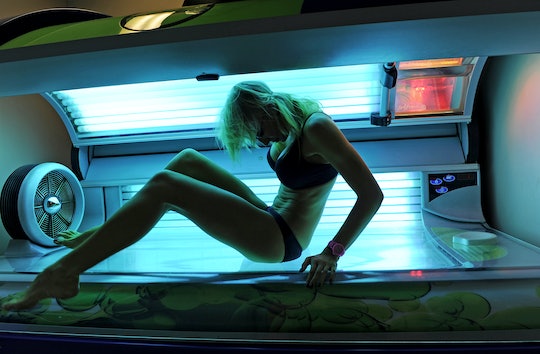 The Food and Drug Administration is proposing a ban on indoor tanning for anyone under the age of 18, and having tanning salons require of-age users to sign consent forms — which detail the beds' alleged cancer risk — every six months. Some people (especially teens headed into the coldest winter months) are probably going to hate the ban, but but do you know what's scarier than losing your year-round glow? Possibly getting melanoma.

Twenty-three states have already banned indoor tanning for minors, and abroad, countries are jumping on the bandwagon. (See what I did there?) France was the first country to make indoor tanning beds inaccessible to teens in 1997, and Brazil bumped things up a notch five years later by banning any tanning for cosmetic purposes, regardless of tanners' age. The World Health Organization already classifies tanning beds as a high-level carcinogen. Letting minors hop in certainly seems risky.

The numbers are in the ban's favor. Approximately 1.6 billion American teenagers spend time at indoor tanning salons. One-fifth of American high school girls have spent time in the past year, and one in ten girls has been at least 10 times in the past year. They're just getting their tan on, right?

Wrong. The truth of the matter is, a teen's desire to look like she spent a week in the Caribbean in her prom dress could lead to her not sticking around to see her own daughter in a prom dresses. It's harsh, but that's the risk involved — but not one that minors, whose frontal lobes are still developing, tend to consider. The brain matures back to front, and our impulse control is seated in that executive frontal lobe. It doesn't help that tanning releases opioid endorphins — so it's a bit addictive, too, making it harder to resist. And there's plenty of damage involved when teens make the decision to go tan.

The American Cancer Society is expecting to see nearly 74,000 cases of melanoma — the deadliest form of skin cancer — this year alone, which will kill about 10,000 of those diagnosed. The thing with skin cancer is that it's usually diagnosed in someone's 40s or 50s — likely after they have smartened up about UV risks — but it's linked to their sun exposure in their early years. Women who tan before age 35 have a 60 percent higher chance of contracting skin cancer, and the effects of taking those risks can appear even earlier than that — melanoma is the second most common cancer diagnosed in women in their 20s.

When it comes down to it, one in five Americans will be diagnosed with skin cancer in their lifetime. Yearly skin cancer diagnoses outnumber the incidences of lung, breast, prostate, and colon cancer combined. And for all of the restrictions and warnings we have in place for cigarettes, there's two times the amount of skin cancer cases diagnosed in people who use tanning beds than lung cancer cases diagnosed in those who smoke. We don't let minors gamble on their future when it comes to cigarettes; I'm not sure why we'd change our minds when it comes to frying inside human Easy Bakes.